Today, to stretch our legs after our long bike ride yesterday on the Ontario Pathway, we found a 3-mile hike through the Bare Hill Unique Area to the top of Bare Hill.  It is located on the eastern shore of Canandaigua Lake, about halfway between the towns of Canandaigua and Naples.  Surrounded by farmlands to the south, east and north, it offers spectacular glimpses of Canandaigua Lake to the west.  In the autumn, as it is now, the colors of trees and wildflowers can be breathtaking. 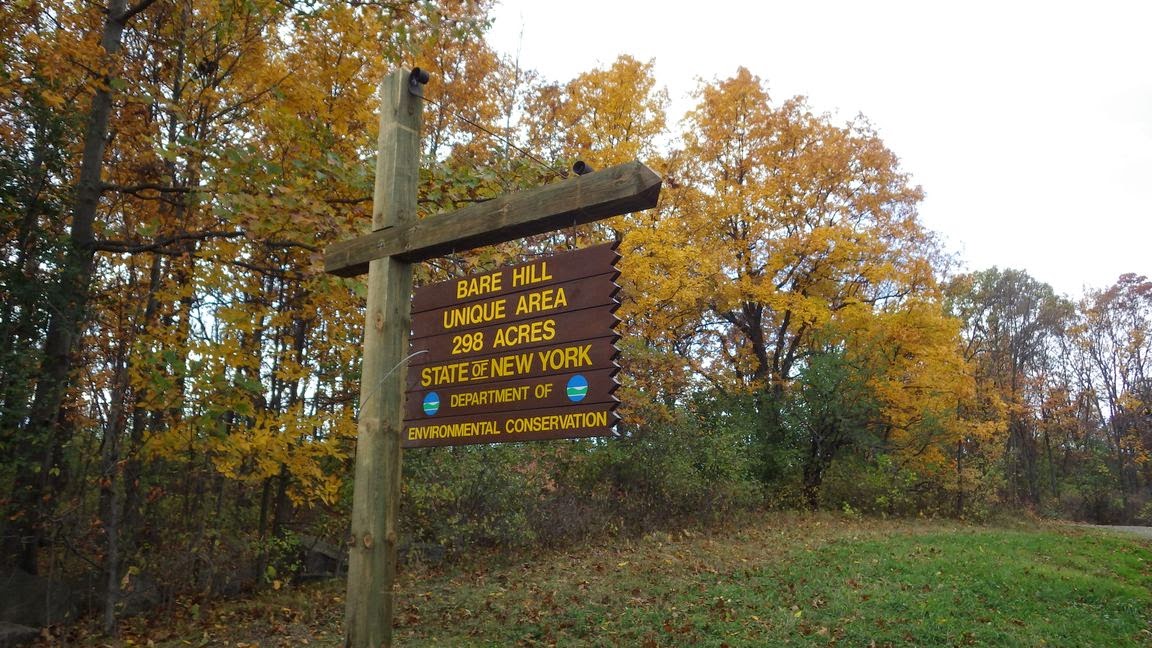 The trail is a modified loop trail that starts, for practical purposes at a kiosk several hundred feet up a grass road from the parking area.  Here, Kathy is studying the trail and its history: 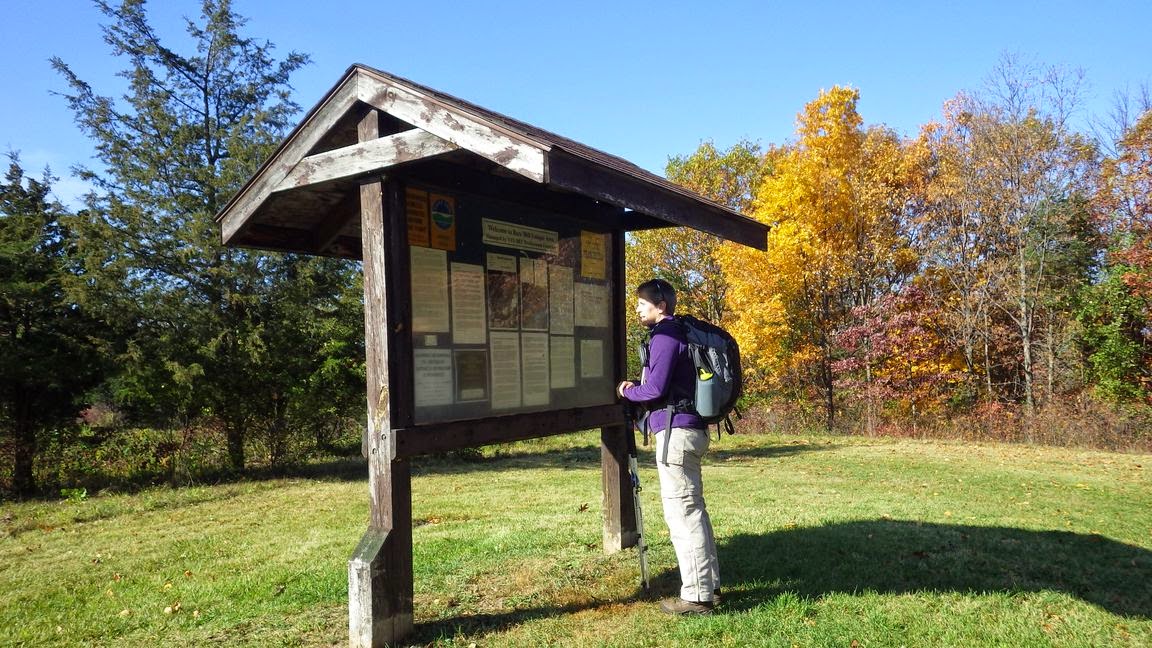 The history of Bare Hill is the stuff of Seneca tribal legends and mundane local farming history, but here are some of the more interesting facts in a nutshell.

The Seneca nation of the Haudenosaunee would hold their council meetings and offer prayers to Great Spirit on Bare Hill. The Senecas were (and still are) the Keepers of the Western Door of the Iroquois Confederacy, whose governmental procedures helped inspire the Articles of Confederation adopted by the 13 colonies in 1777 and whose matriarchal society and tradition of property rights for women influenced the founders of the American feminist movement in the 1840’s.   The hill is known to the Senecas as "Genundowa."   Interpretive signs in the area tell of Algonquin habitation that predates the Senecas.  The upper trail leads to a large boulder (commonly known as "Council Rock") where, at 9 p.m. on the Saturday of every Labor Day weekend, the Senecas’ annual ceremony of thanksgiving for peace and abundant harvests, known as "Genundowa," "Festival of Lights" or "Ring of Fire," is celebrated.  Now, flares are used, but originally, the lake was lit with cattails soaked in kerosene and strategically stationed around the lake. A bonfire is lighted in the firepit near Council Rock.  Then on the lake below, residents ignite red road flares all along the 32-mile shoreline, creating a “ring of fire” that links this chosen spot with its distant past.

Historically, the top of the hill was truly bare, as can be seen in this photo of Council Rock and the fire pit behind it, from an older trail guide: 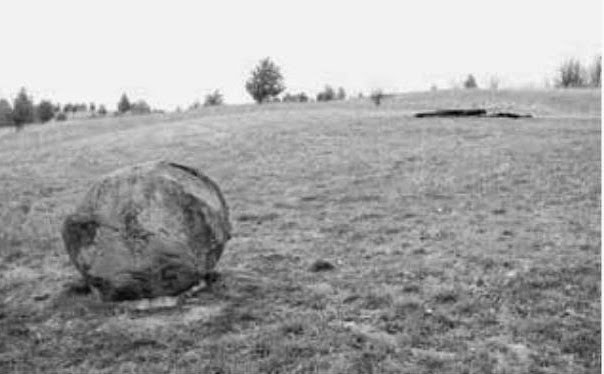 Contrast that historic photo with the way the hilltop looks today from the same angle: 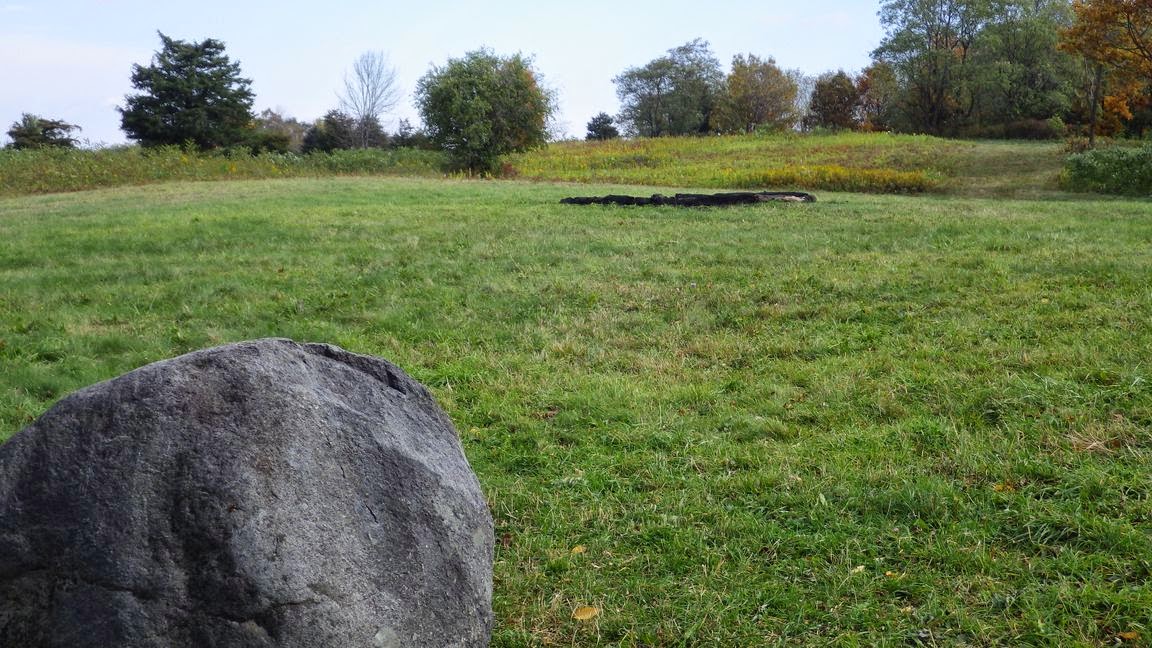 While the Senecas have legends for why the top of the hill was bare, there is information suggesting the Native Americans used the hill as part of a signalling and lookout system, and that they systematically felled trees on the top of the hill to facilitate these functions.

Today, the area is filled with young hardwood and fir trees.  Most of the trail is a mowed forest road and is easy to hike.  Look carefully along the trail and you'll see lots of micro-scenery.  Here is a pastel piece of some long-abandoned equipment, tilted upright by some anonymous person for viewing by the rest of us as we pass: 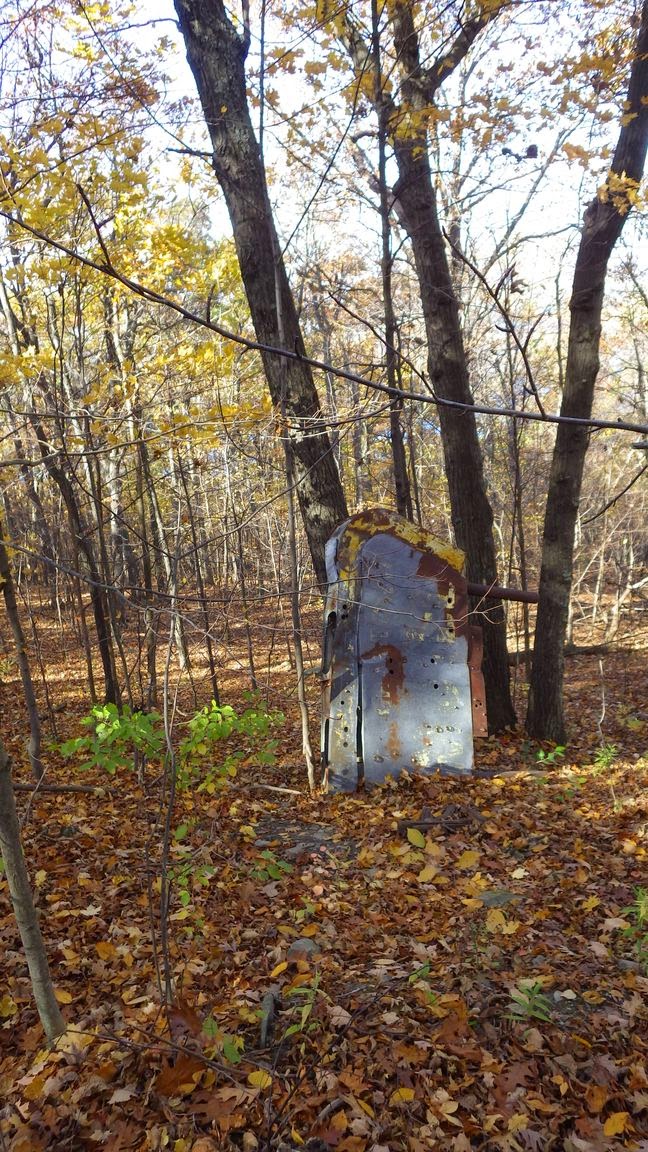 The trail bears hints of many little dramas.  The strewn feathers -- 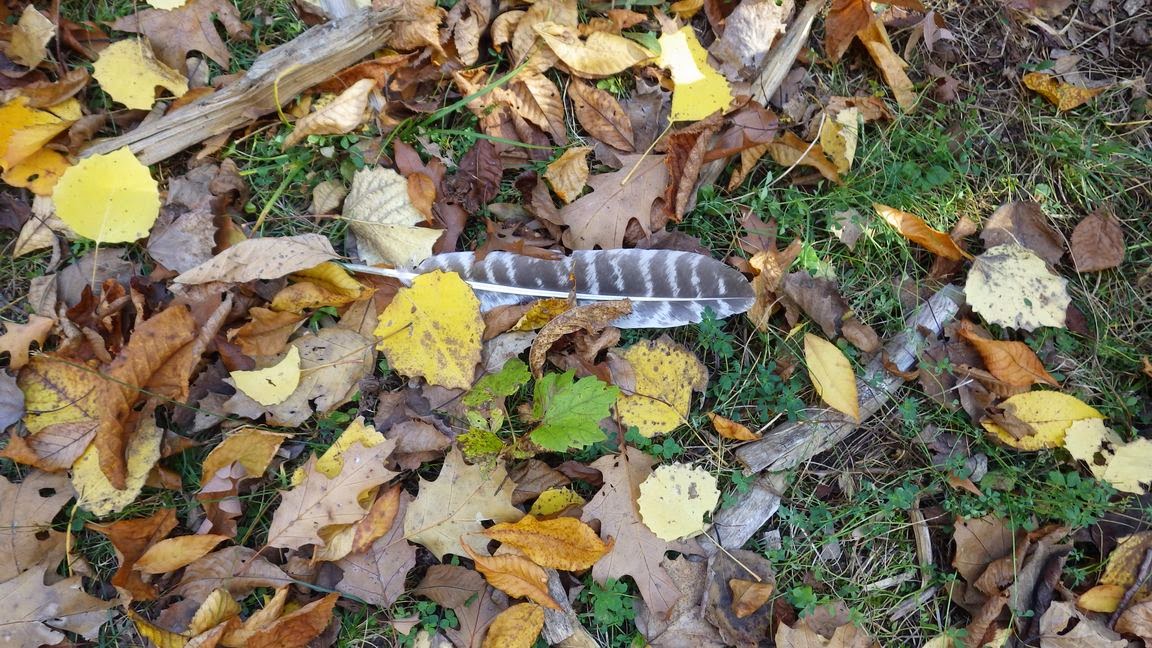 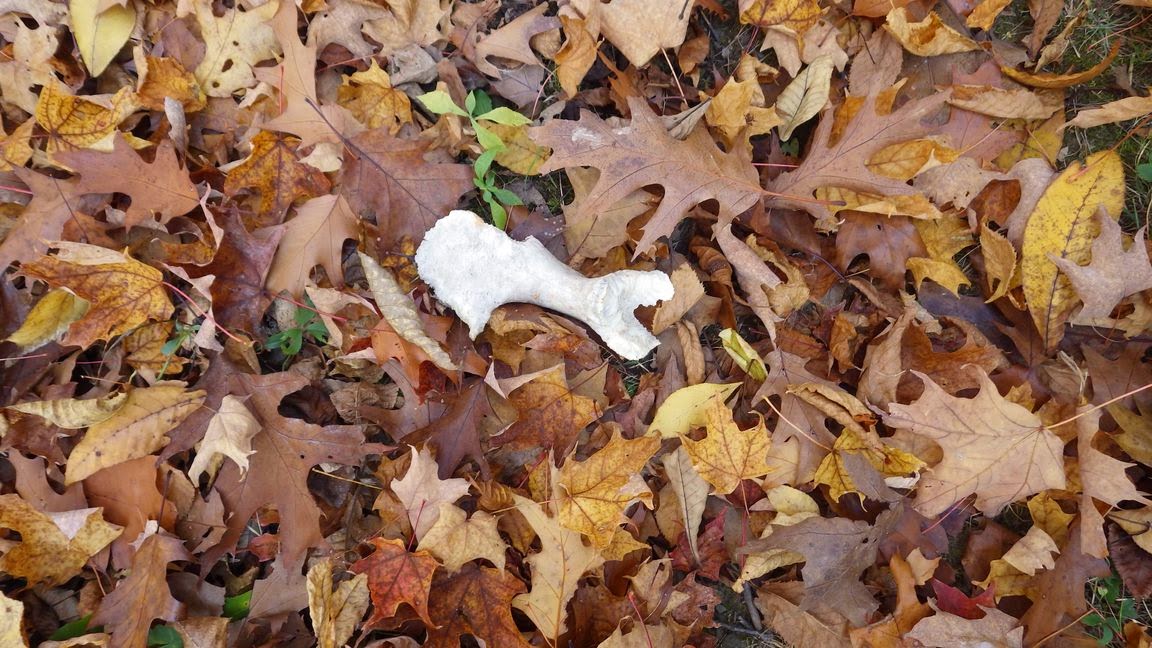 We saw four distinct types of scat, evidently bear, Eastern coyote, fox and perhaps bobcat.  However, Kathy has a rule that we cannot post poopy pictures on the blog, so you'll just have to use your imagination on that score.

The bushes and wildflowers were striking in their delicate colors: 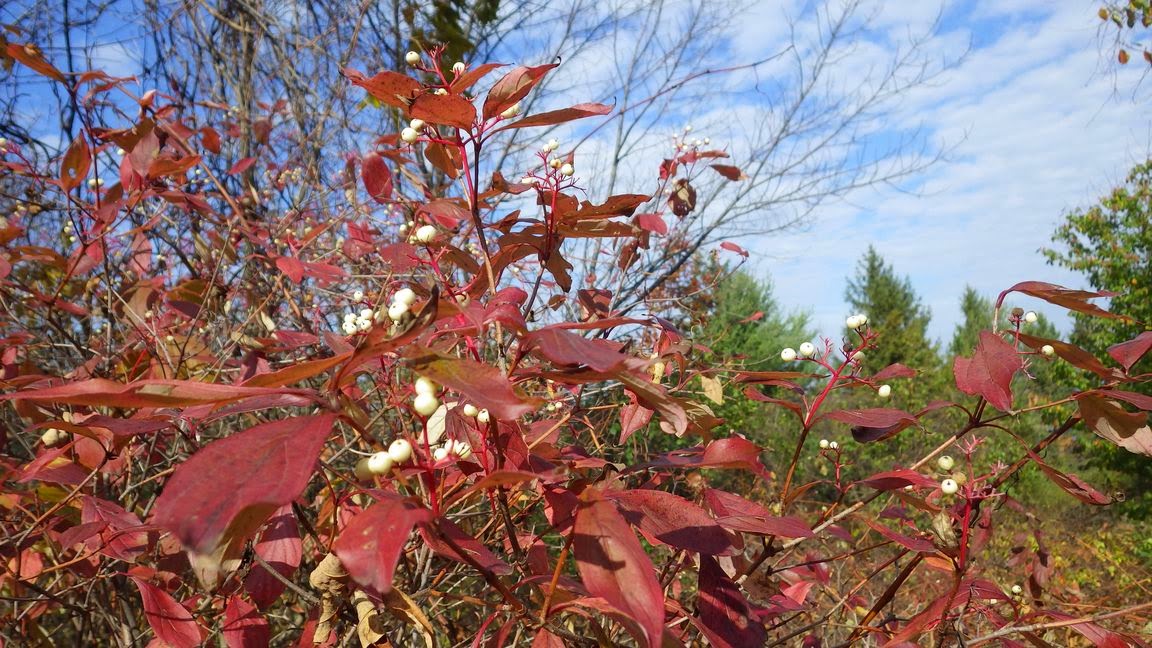 We were even rewarded a "three-fer" in this collection of wildflowers: 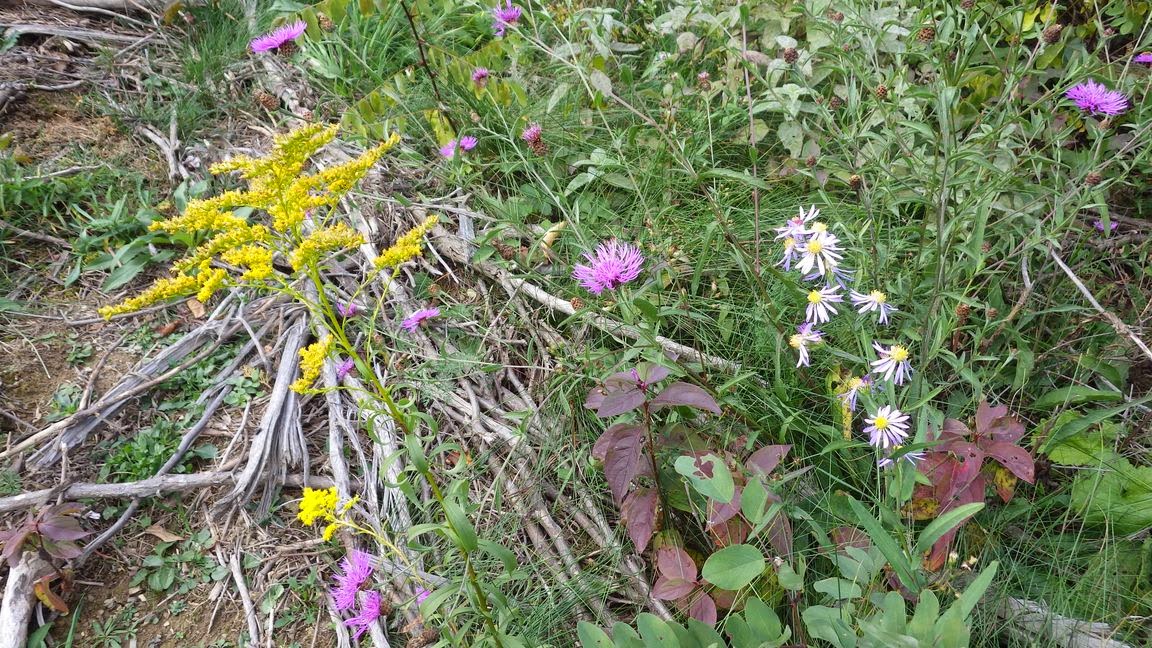 At the end of the lower trail is a primitive campsite.  It is so well maintained, we imagine that some locals have taken the responsibility to tend to it: 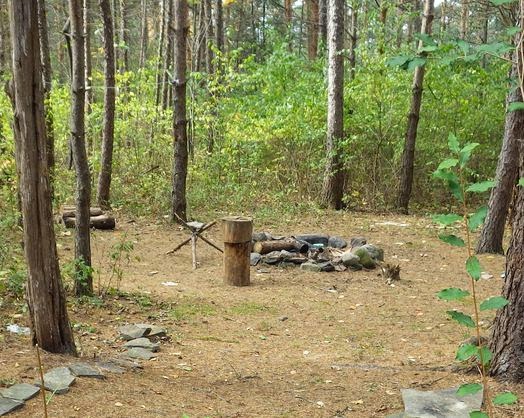 At the top of the hill, there is still an expansive meadow.  While we had a light wind this afternoon, the bend of the trees was testament to the evident strength of winds coming across and up the lake. Without a heavy forest cover, the hilltop undoubtedly gets swept hard from time to time: 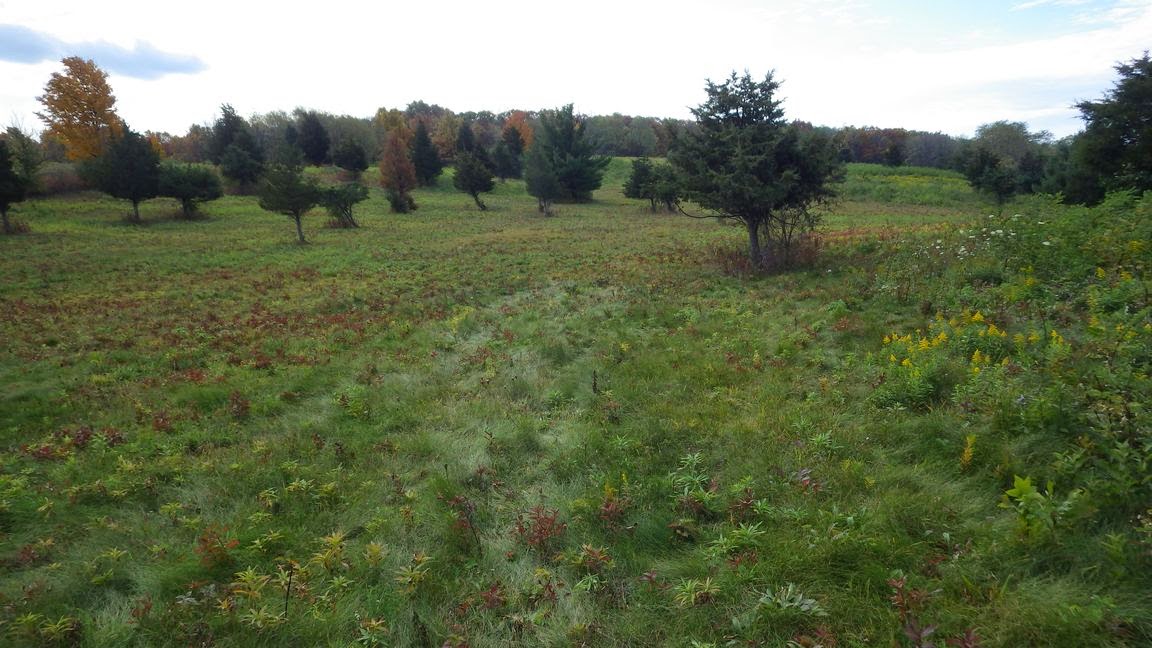 At the end of the trail, we found the fire pit where the annual bonfires have been set for uncounted years: 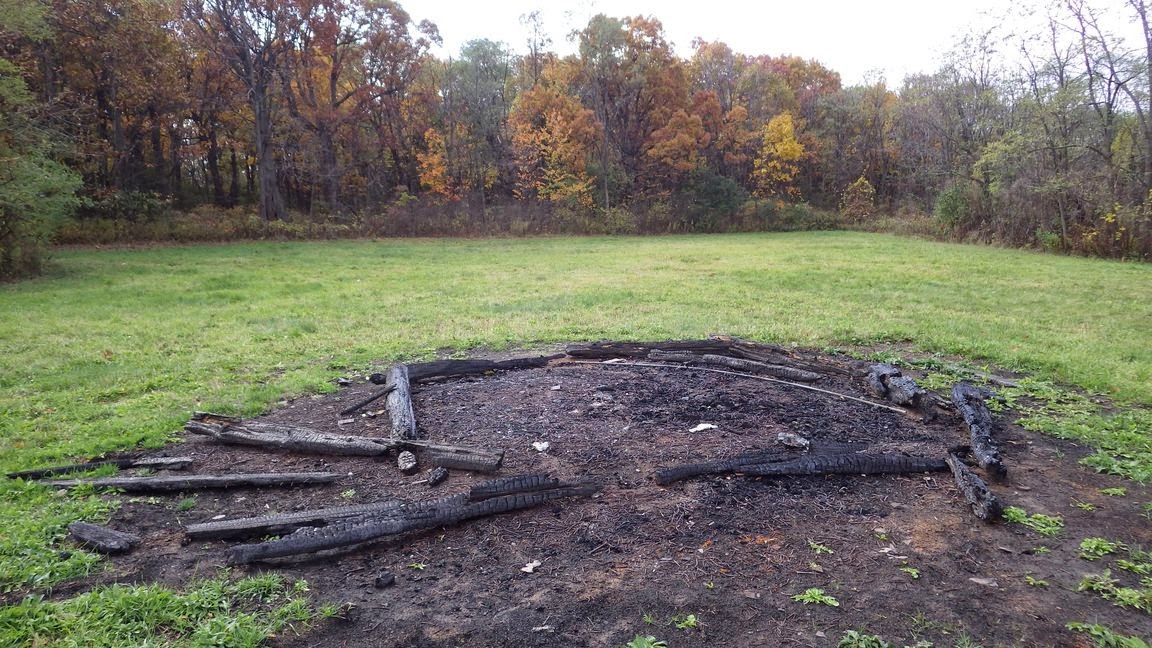 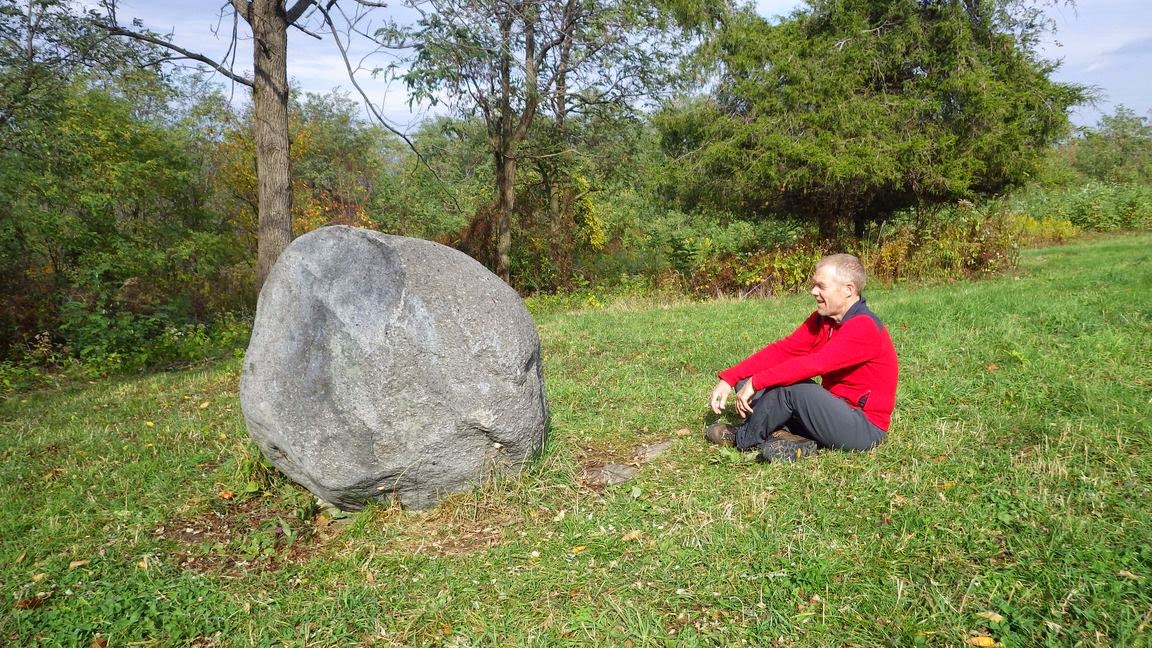 Looking back across the fire pit, we got glimpses of some trees still retaining their bright autumnal colors: 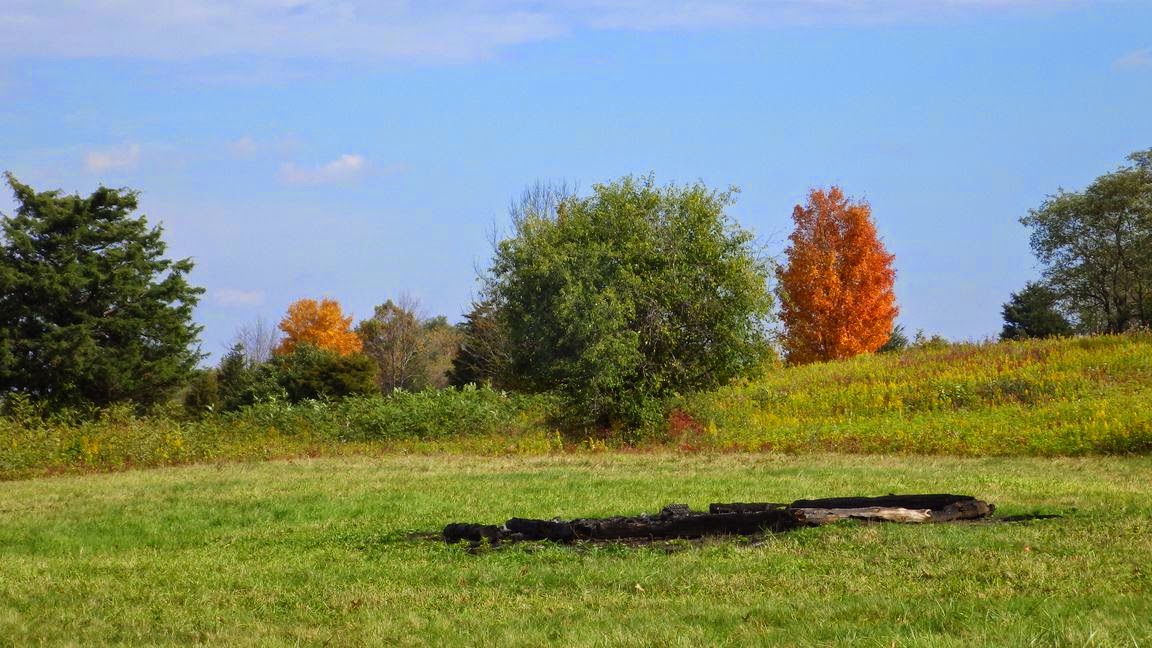 The views out over the lake were also awe-inspiring on this clear, sunny day: 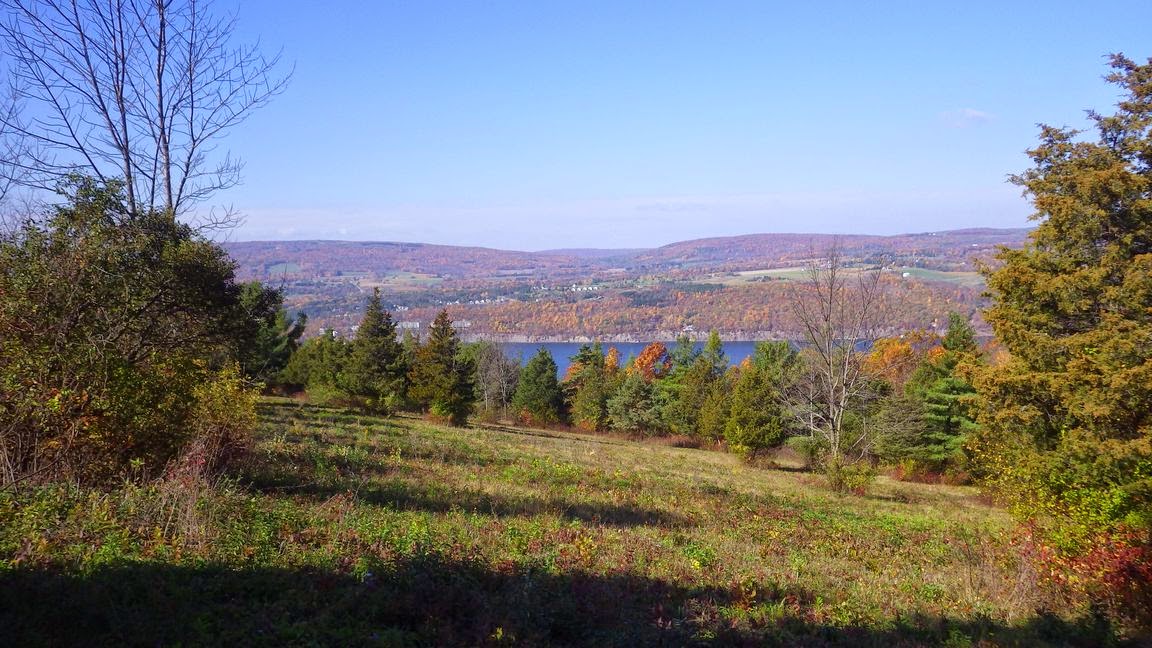 Colors in the distant hillside echoed the oranges, browns, yellows and reds of leaves at our feet: 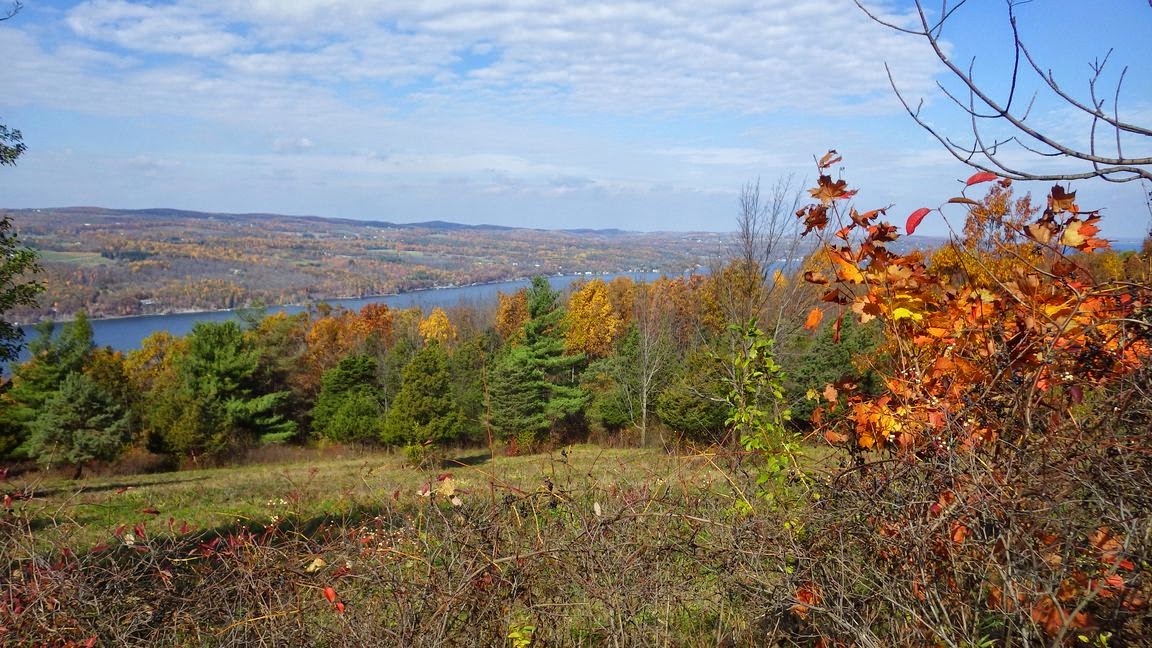 In each direction, the color of the palette changed: 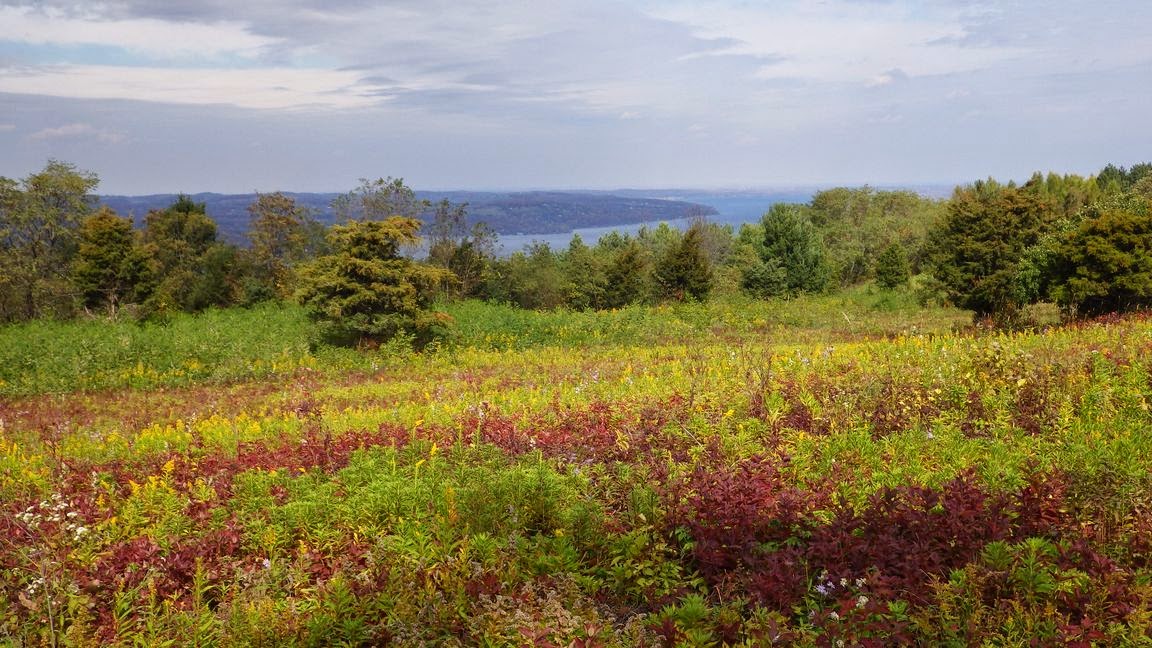 On our hike back, we came across this pond, which lies on ground the Senecas consider sacred: 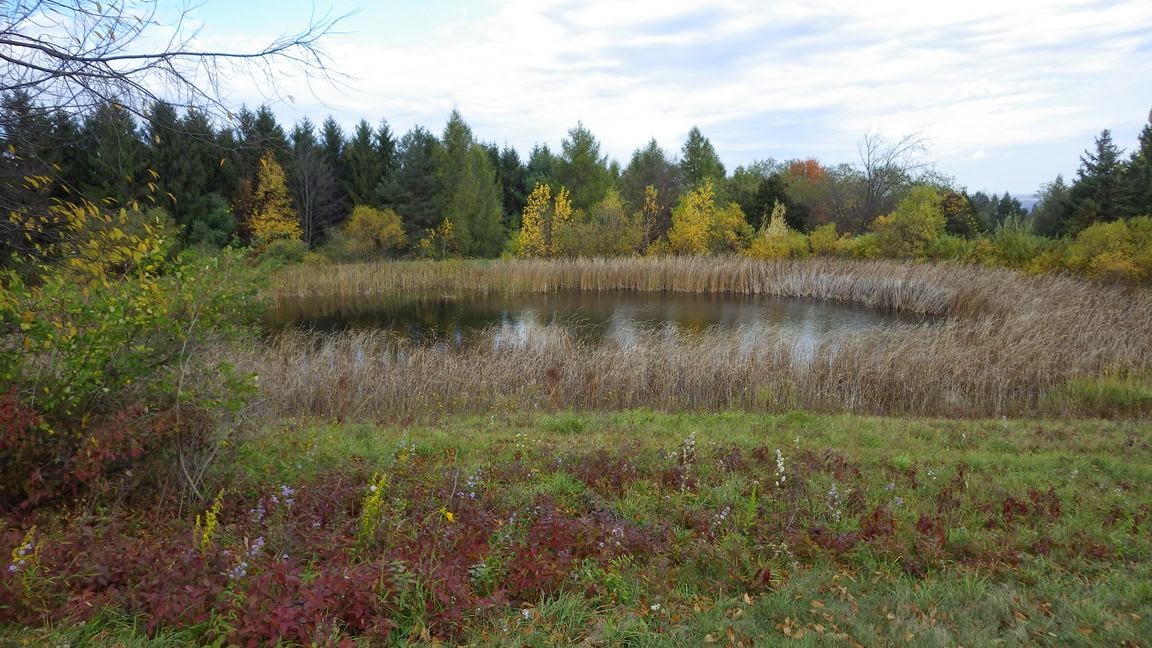 Looking at the terrain, the age of the trees, the ponds and the mowed forest roads, one can imagine that the area was first logged, and then perhaps used as pasture land.  According to the NYDEC, in 1788 a group of investors purchased the land from Native Americans for a payment of $5,500 annually forever. However, the deal fell apart quickly, and a year later the land was quitclaimed to one Arnold Potter, who then offered divided parcels of the land to other settlers. The area was used to graze sheep and grow crops.  The southern portion of the Bare Hill Unique Area was purchased by New York State in 1989, because of its scenic beauty and its legendary ties to the Seneca Indian Nation. The northern parcel was purchased in 2007.