After an action packed, fun filled weekend with William, we took Monday off to sleep in, clean the rig and rest our weary bones. Tuesday morning dawned bright and chilly (50F). The smoke from the wildfires in California, Oregon and Washington has reached all the way over to the East Coast. The morning sky was hazy and the sun glowed a strange peach color. Our hearts go out to our family and friends who are dealing with much worse conditions out west. We are doing what we can to support the Go Fund Me campaign that is feeding the fireman and the Red Cross, who are sheltering the displaced. All we can do now is hope the weather changes and this nightmare ends.

After taking in the morning news, all we really wanted to do was crawl back under the covers and hide, but nature called to us and we had to answer. Lake Fairfax Park, where we are camped, is over 476 acres, 18 of which is Lake Fairfax. There are 26 separate multi-use trails. It isn't often we get to start a six mile hike right from our rig, but here we could.

First, we needed a better map, so our first stop was the Visitor Center. With map in hand, we set out to find the North Boundary Trail. The trail was a bit overgrown in this section, which made it a perfect grazing ground for a flock of geese resting on their way south. 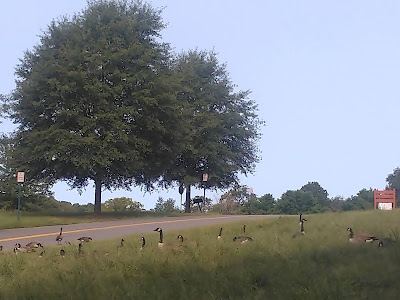 Lake Fairfax is formed by a dam on Colvin Run. A spillway lets part of Colvin Run continue on its journey to the Potomac River. A small bridge allowed us to cross the run. 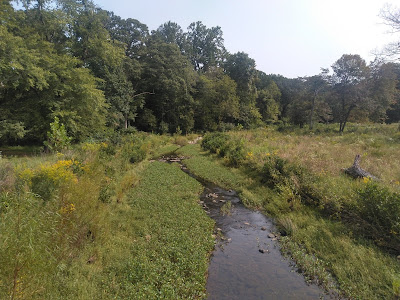 On the other side of Colvin Run, the North Boundary Trail became easier to follow as it joined the Rails to River Trail. 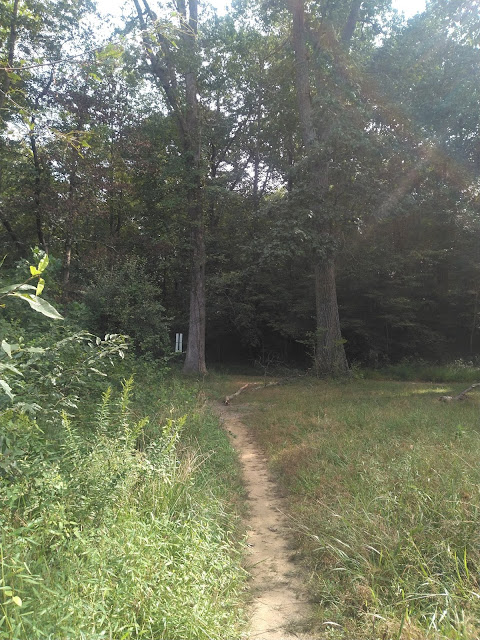 The Hunter Mill Bypass is an old farm road. The wide woods road made it easy to walk side-by-side. 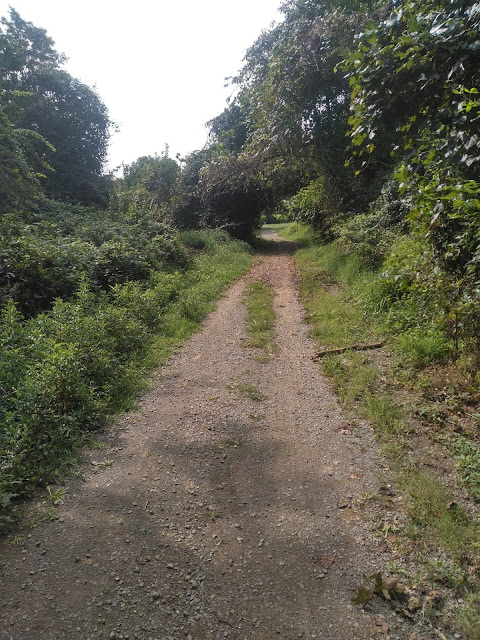 There are a number of old farm buildings in the park being left to return to nature. The pastures are now being used as cricket fields. 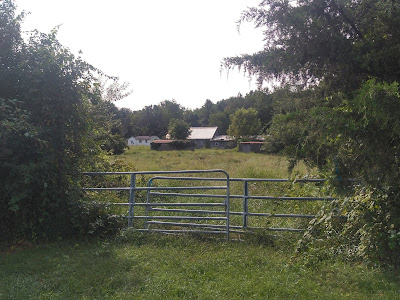 During our trek, we hiked on every conceivable surface from grass fields to gravel roads, bridle baths to mountain bike single tracks. 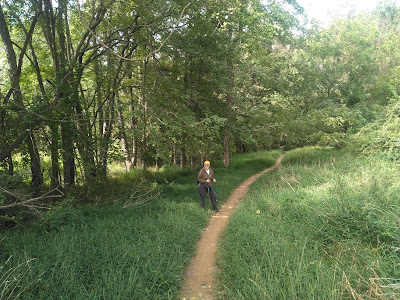 As we followed the South Side Trail, we found ourselves next to huge "Yuppie estate" properties. The development was so new, several of the houses were not even occupied yet. Each lot had their own entrance gate to the park. 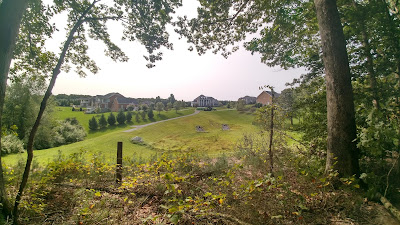 It just wouldn't be a good hike if we didn't run into some fun guys along the way. 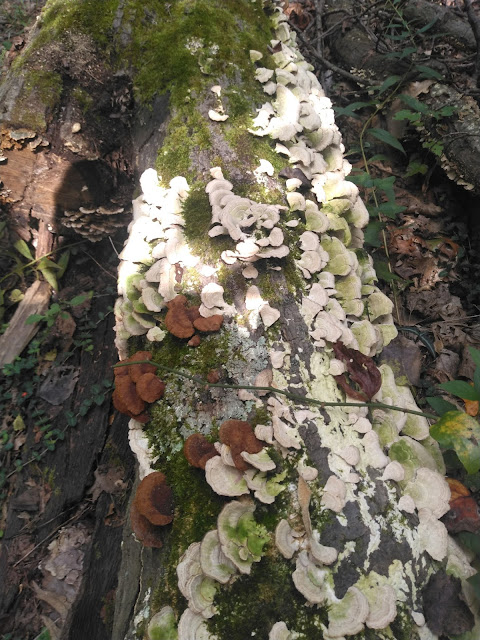 After four miles, we decided to find a spot to rest and recharge. Nothing is better than a yummy veggie wrap and warm sunshine for lunch. 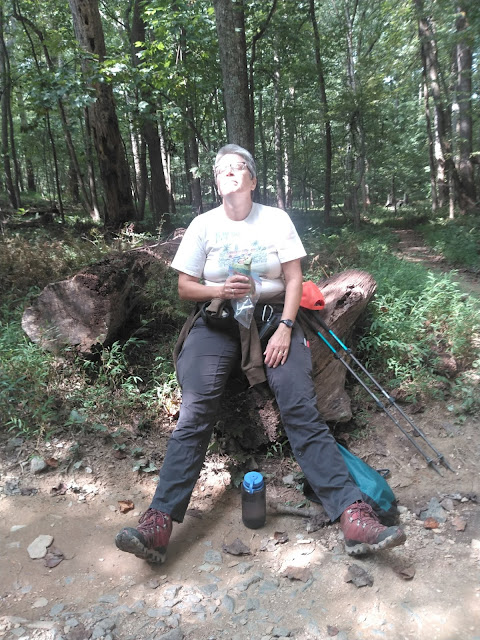 As we began our hike north along the Rails to River Trail, we found ourselves following Colvin Run, only this time it was heading toward Lake Fairfax. 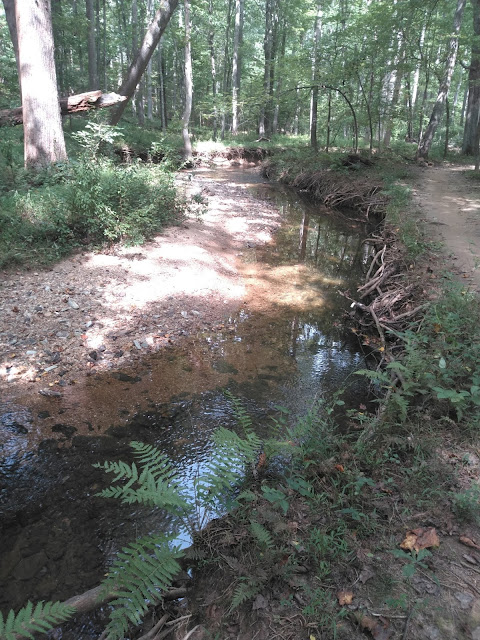 In order to explore more of the west side of the park, we left the Rails to River Trail and picked up the Bentana Park Connector. 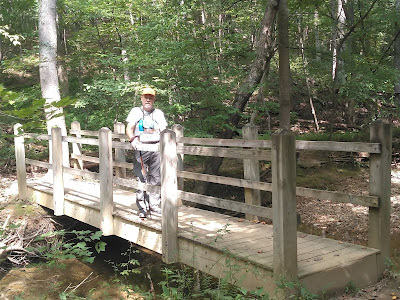 This connector trail took us right along the stream bank. 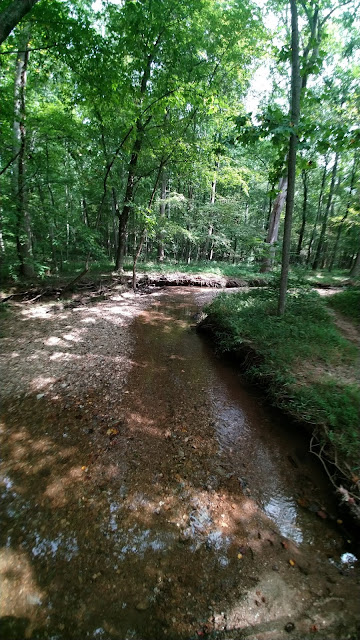 After a leisurely stroll along the stream, we found ourselves back at Lake Fairfax. We found a short-cut to the campground and finished our hike of just under 6 miles.

It may be a few days before we blog again. We have to take Baxter to the vet to have his eye checked. So far, he seems to be recovering nicely. The vet will let us know if he has any infection left. On Thursday, we move back to Bull Run Regional Park. Then, on Friday, it is another weekend of adventure with William.

Until then, stay safe my friends.