We finished our two weeks at Bull Run and have moved over to the Prince William Forest RV Campground in Dumfries, Virginia. We had stayed here before, but never had enough time to explore. We hope between taking care of our Grandpuppy Bubu after his hip surgery and ferrying William to and from golf camp, that we'll find time to explore the 37 miles of hiking trails and 21 miles of biking trails.

We made our first stop of the day at the Visitor Center to pick up maps and information. 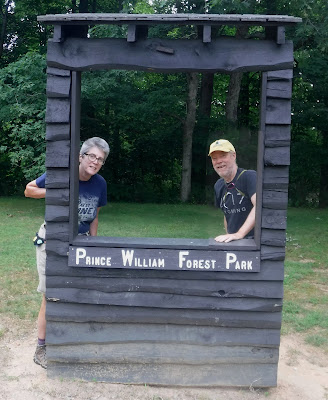 Prince William Forest Park is an interesting place. The story starts with President Franklin D. Roosevelt's New Deal. In 1933, Roosevelt created a new kind of park, the Recreational Demonstration Area (RDA) to reuse marginal, overworked land. The park was built by the New Deal's Civilian Conservation Corp (CCC). Over 2,000 CCC enrollees came to work along the Chopawamsic and Quantico Creeks. The Chopawamsic RDA (now known as Prince William) was a model for the entire nation, one of 46 such land-use park projects. It was to be a new type of camp where low-income, inner-city children and families could get away and experience the great outdoors.
The CCC camping cabins were ready in the summer of 1936. There were camps for boys, girls and mothers and tots. Each camp housed up to 200, who stayed for two to three weeks. Charity-funded groups and social agencies sponsored and ran the camps. While the Chopawamsic RDS was the first to welcome inner-city kids, the camps were segregated by race. Today, the larger cabins are still used by various organizations, but a few of the smaller cabins are available for rent.
You, too, can stay in an original CCC cabin! (Pretty sure the window air conditioner was not part of the original design.) 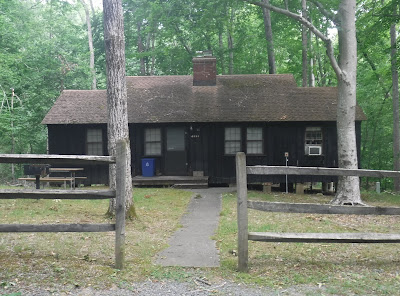 For today's adventure, we set our sights on the old Cabin Branch Mine site. We decided we would approach the old mine site by hiking down the Quantico Cascades Trail to Quantico Falls, and then down the North Valley Trail.
To reach our trailhead, we took the park's Scenic Drive, a ten mile loop around the heart of the park. We made a quick detour to check out Carter's Pond. We later learned that there is a black bear that likes to hang out there. Unfortunately, we didn't spot the bear during our stop. 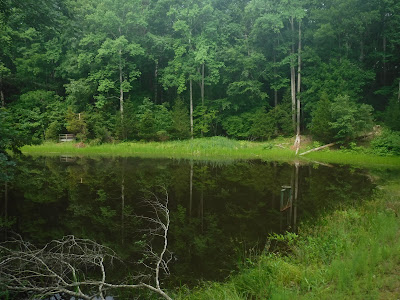 The first part of our hike was along the Quantico Cascade Trail which leads downhill to Quantico Creek.  It is coincident with the Park's Geology Trail, which informs the hiker about the geology of this area.
"What geology?" you ask.
Prince William Forest Park is located along the Fall Line between the Piedmont Region and Coastal Plains in Virginia. Piedmont is an Italian word that means "foot of the mountain." The Piedmont Region of Virginia is located to the east of the Blue Ridge Mountains and west of the Fall Line. The Fall Line is the natural border that lies between the Piedmont Region and the Coastal Plain/Tidewater Region.
It just wouldn't be a good hike if we didn't start with a trailhead selfie! Since our hike followed the Geology Trail, there were still several of old "hysterical" markers still remaining that discuss the geology of this region, but many of the old markers were damaged by weather and falling trees. Today, folks can follow this link to the Geology E-Trail.
David was intrigued with the idea of a Geology Trail, and wondered what we would find: 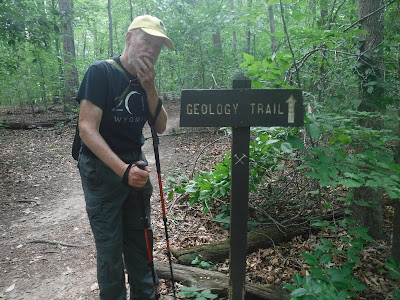 Well, here is what we found.
The rocks laying in Quantico Creek are the metamorphosed remnants of ocean sediments and volcanic flows. These rocks are part of the Chopawamsic (Chop-uh-wam-zik) formation. Chopawamsic rocks cover almost of the entire northern and western sections of the park. The pinkish lines running through the rock are quartz and formed as an addition to the rock at a much later date. 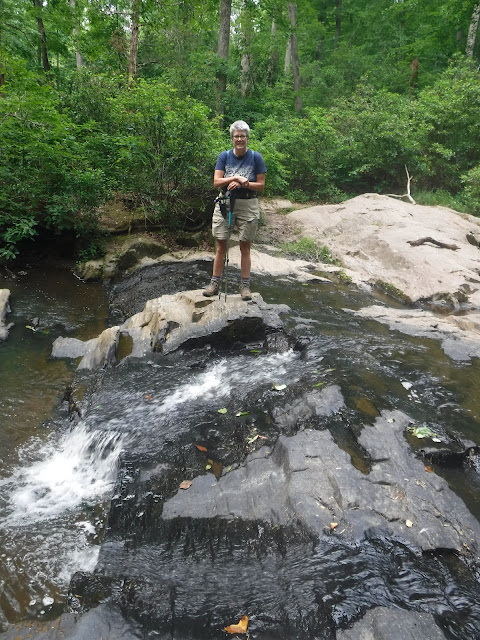 At the Cascades, we discovered the first wildlife of the day (well, if you don't count the dozens of squirrels, which were everywhere)! Ruby would have loved to visit this park. 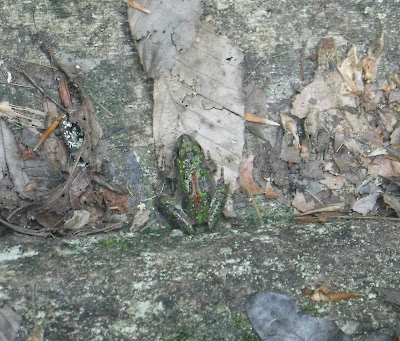 It's not often you find trees on the East Coast that are so large you can't wrap your hands around them. 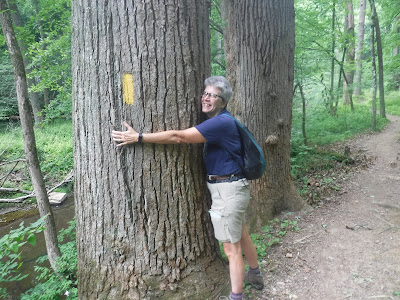 Hidden beneath the layers of soil and leaves at this site is the boundary between the Piedmont and Coastal Plain. The cascading sections of the north branch of Quantico Creek reveal the presence of this boundary.
The Fall Line is the name given to this boundary between the Piedmont and Coastal regions.  It extends from New Jersey to Georgia. The stream flows downstream through natural cracks or joint systems in the rock. During floods, the seemingly immovable rocks in this stream are rolled along the bed or bottom. This part of Quantico Creek is transporting large amounts of sediment as well as eroding the exposed rocks. 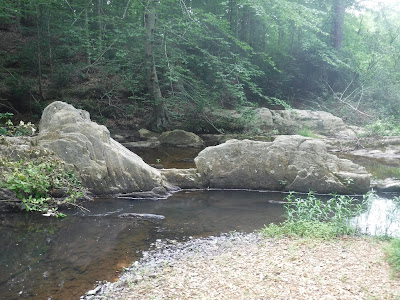 Prince William Forest Park preserves approximately 15,000 acres of Piedmont forest covering a significant portion of the Quantico Creek watershed. The park represents one of the largest parcels of undeveloped land in the area and is the third largest unit of the National Park System in Virginia. That, combined with the fact that it is the largest example of a Piedmont forest in the national park system, makes it a significant natural resource.
Besides that, it is really cool on a hot summer day! 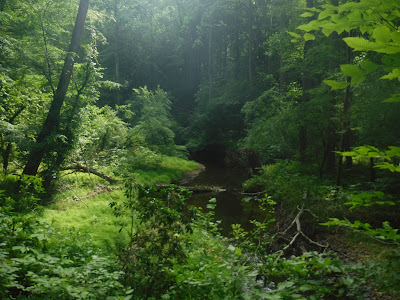 It is amazing, after all these years, to find the work of the CCC sprinkled around the park. For example, we happened upon this simple bench built in 1933 that will probably still be here in 2033: 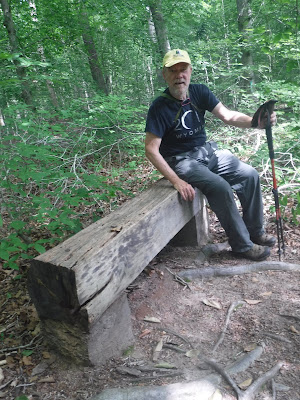 After meandering along the North Valley Trail, we found the first evidence of the Cabin Branch Pyrite Mine. The concrete foundations are still visible. 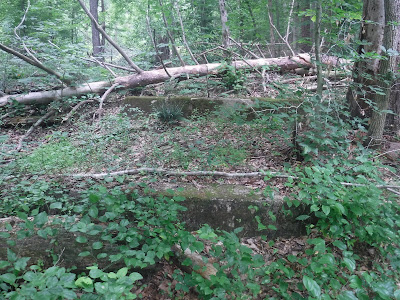 The Cabin Branch Pyrite Mine began operations in 1889 after pyrite (a shiny yellow mineral consisting of iron disulfide and also known as "fools gold") was discovered near the North and South Forks of the Quantico Creek. The Cabin Branch Mining Company operated from 1889 to 1908 on a limited basis and provided opportunities for industrial growth in the area following the Civil War. Pyrite was used to create sulfur, which was a necessary ingredient in products such as glass, soap, bleach, textiles, paper, dye, medicine, sugar, rubber, and fertilizer. When World War I broke out, the Cabin Branch Pyrite Mine contributed to the production of gunpowder.
Our hike would now take us on a loop around the old mine site. 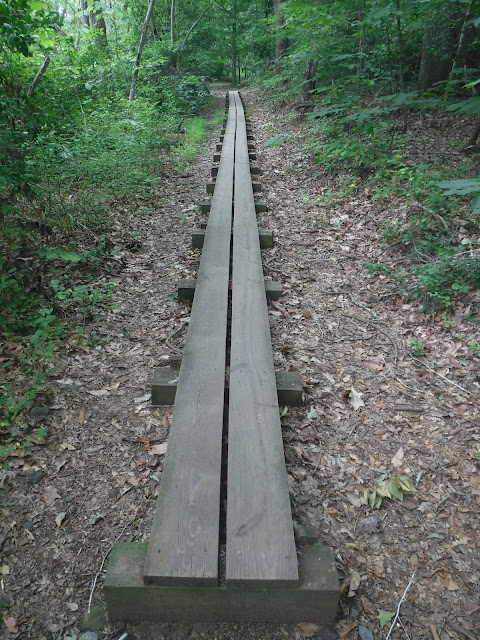 We crossed the creek on a new footbridge. 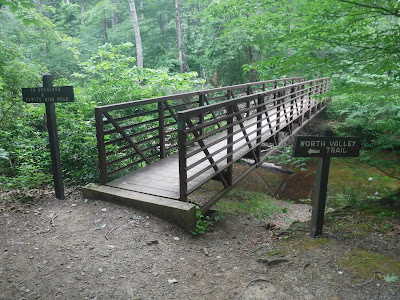 The new boardwalk is made of a composite material made to last for decades. 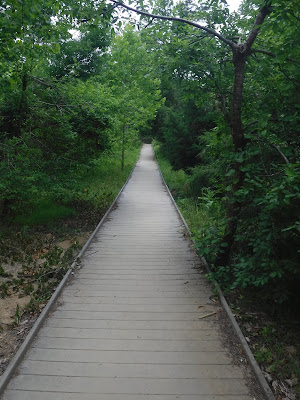 The Blue Tailed Skink or Five Lined Skink is a species of lizard that is native to the Eastern United States and parts of South-Eastern Canada. It is always a surprise to see that bright blue flash across your path. 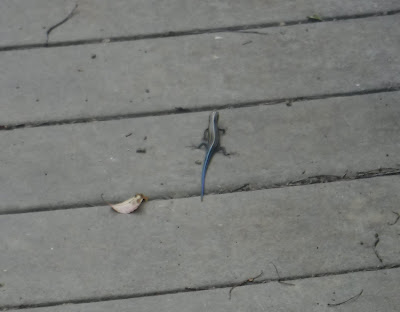 As we continued along the boardwalk, we came to the Cabin Branch Pyrite Mine Overlook. During the mine’s operation, more than 200,000 tons of pyrite was brought to the surface and processed into sulfuric acid. The mining operation had a devastating effect on the surround landscape. 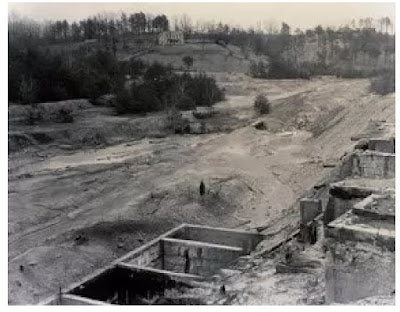 However, since the Park Service took over the restoration of the property in 1994, you can't even see where the mine was located, due to all the tree growth: 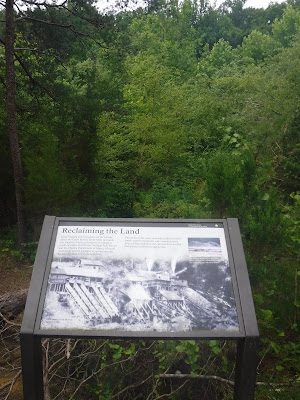 After we completed our history loop, we made our way back to the trailhead. While we didn't actually see a beaver, there is no doubt this tree stump was once gnawed on by a beaver. As it turns out, beavers were almost extinct and had completely vanished from Virginia in the 1890s. In 1950, two pairs of beavers were released in Mary Bird Branch and their population has thrived in Prince William Forest Park ever since. In the late 1990s, it was estimated that over 80 beavers lived in the park. One of them chomped this small tree. 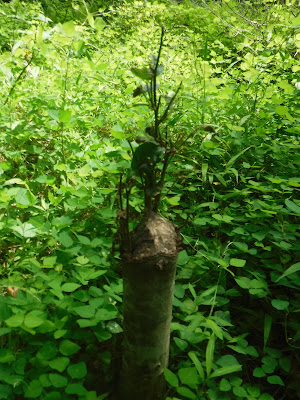 Just as we were finishing our hike, two deer crossed our path. The older one, a female, bolted up and over the nearby hill. The younger one, a male, seemed curious and watched us from across the creek. The young buck had two little points atop his head. 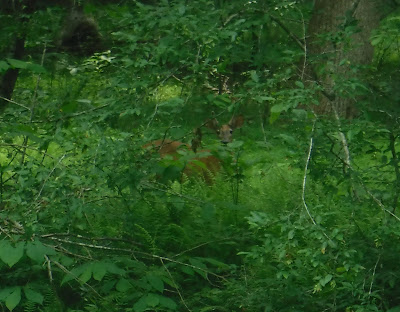 We finished our hike with a picnic at the trailhead. We made it back in time to give Ruby a short walk before the afternoon thunderstorms pounded us with rain. We were glad we got an early start today.

It may be a few days before we can get back out to Prince William. Until then, stay thirsty my friends.

Posted by Kathy Scranton at 5:38 PM