As noted in our prior blog, we made it safely to Riverside, California and rescued a kitten. Ruby continues to be a source of endless entertainment for our other two cats, Flip and Baxter. As for our entertainment, we plan to camp here in Rancho Jurupa through the Thanksgiving weekend. We arrived early so we would have time to explore. Our friend, Darla, lives just down the road from our campground. She came up with a list of adventures for us.

On Thursday, we started our visit with Darla with a trip to Anchos Southwest Grill & Bar. A visit with Darla would not be complete without at least one visit to Anchos, the best Southwestern restaurant this side of the border. During our scrumptious dinner, we planned our week.

On our first full day, we drove to Disneyland! When we were here last Thanksgiving, the Star Wars Land wasn't open yet. Star Wars: Galaxy's Edge open on May 31st. For the first few months, you needed a reservation just to get into this area of the park. Now, its open to the public, but you still need a reservation to go into Olga's Cantina.

As soon as we arrived in the park, we went straight to Galaxy's Edge and queued up for the one ride that was open - The Millennium Falcon: Smuggler's Run. This attraction takes six guests to man the Millennium Falcon. Each guests is assigned to one of three roles: pilot, engineer, or gunner. Each role has a significant impact on the success of the mission. We were matched up with three other people. Darla was a gunner, while Dave and Kathy both ended up as engineers. Here was our first look at the Millennium Falcon and the Black Spire Outpost. 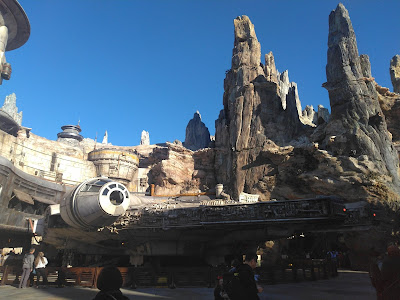 We had a 50 minute wait, which is not bad for a main attraction at Disney. The ride was a combination of motion control, video and gaming. You need to push buttons and pull levels in order to complete the mission. We are not really sure exactly what we did, but somehow we flew the Falcon, shot down the enemy, retrieved the cargo needed for the resistance and returned safely. Having survived our mission, we went over to Olga's Cantina for a galactic cocktail. 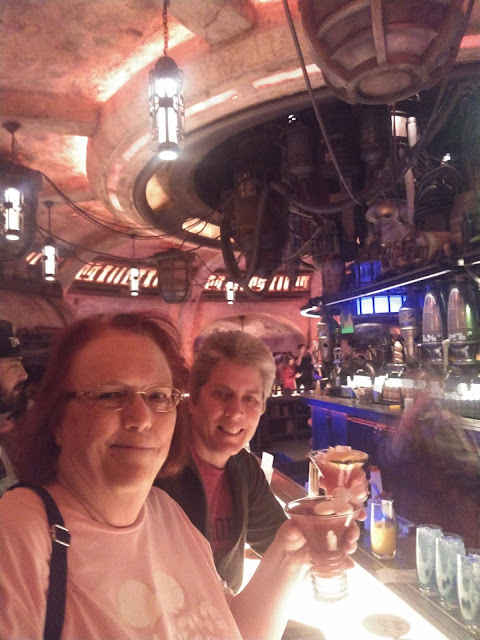 The cantina's music is provided by R-3X, a droid that was first seen as RX-24 (a.k.a. Captain Rex) in Star Tours, and is now the cantina's DJ. 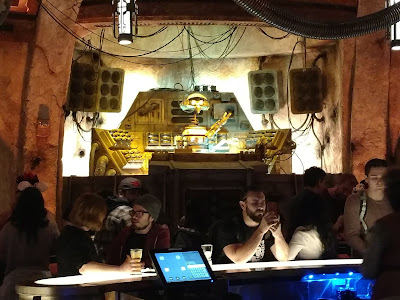 After quenching our thirst, we did a little shopping. We tried to stay out of the way of the Storm Troopers. However, we did see Chewbacca and Rey in the market place. Before leaving the Galaxy's Edge, we shared a glass of Blue Milk.  Also known as Bantha milk, it was a rich blue-colored milk produced by female banthas. Cheers! 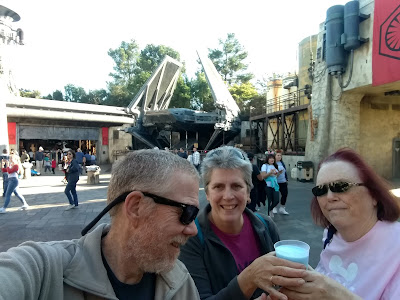 We worked our way back to Main Street one ride at at time. After some Christmas Shopping, it was time to say goodbye to Mickey and all his friends. 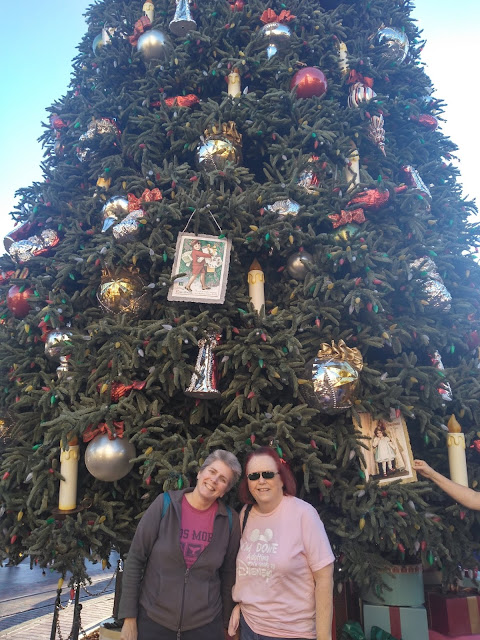 As we left Disneyland, we realized we were close to Placentia and the home of The Bruery, one of the best craft breweries in the world. With 42 beers on tap, there was no way we could try them all. We picked 10 of the beers we thought we would like best and tried them as a taster flight. We picked our favorites and then brought home a couple crowlers for later. 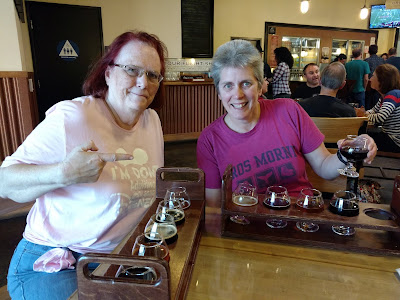 Sunday was another beautiful, blue-sky Southern California day. To take advantage of the nice weather, we headed toward Laguna Beach. Before hitting the beach, we did a little more Christmas shopping at the Sawdust Art and Crafts Festival. Let the shopping begin! 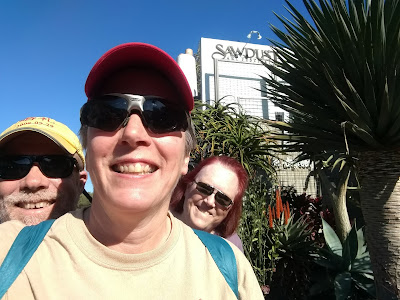 The festival grounds had been transformed into a winter wonderland where 180 artists create, display and sell original creations. It is marketed as the most unique holiday shopping in all of Southern California. Art media includes jewelry, clothing, fused and blown glass, ceramics, woodwork, forged metals, painting, photography, sculpture, clothing and textiles, not to mention Santa. Unfortunately, Santa was "out" when we arrived. 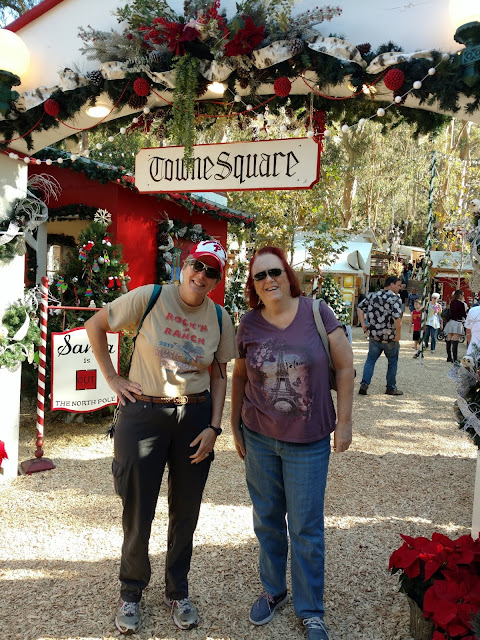 We worked our way up and down the aisles. We found a wine and beer vendor, which made for relaxed wandering. 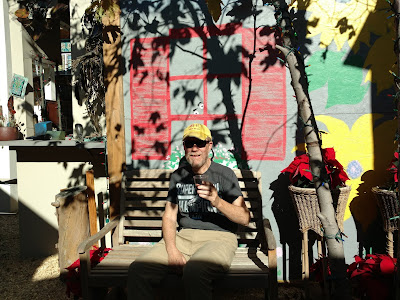 Actual sawdust covers the streets of the Christmas village. 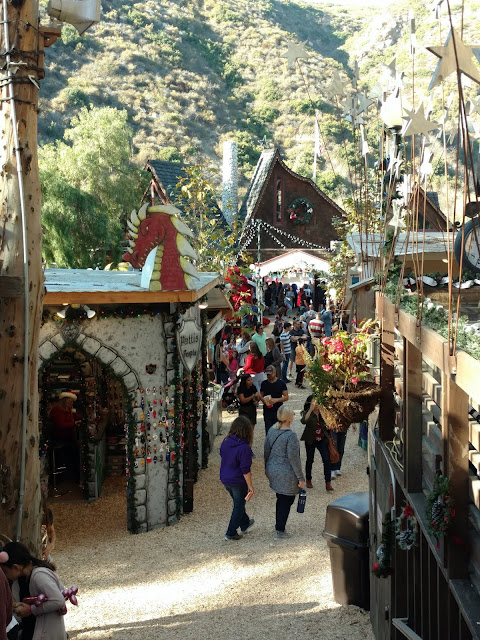 The festival grounds are just as impressive as the crafts for sale. 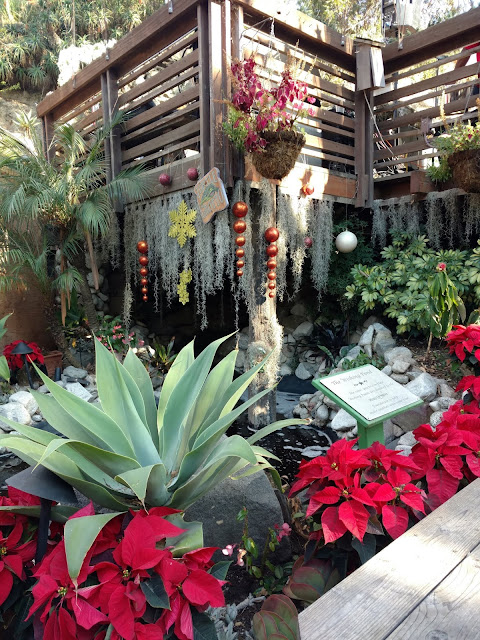 With bags full of booty, it was time to check out the surf. 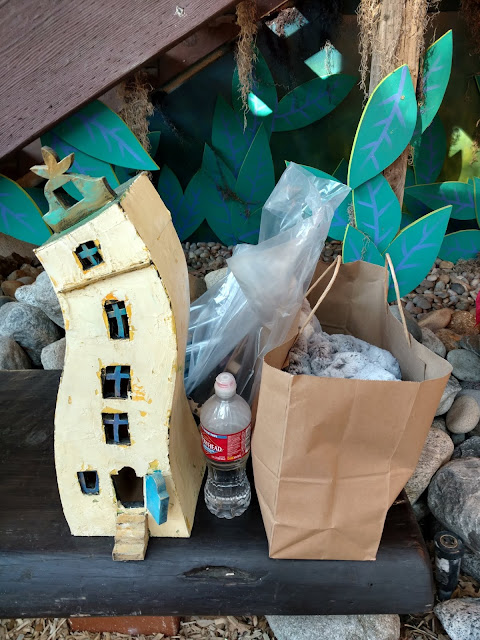 Our ultimate destination was Beachcomber Grill in Newport Beach. The little restaurant sits right on the beach. If you don't make a reservation 24 hours in advance, the first-come-first-served wait can be over two hours. We put our name on the list and went for a walk on the beach. 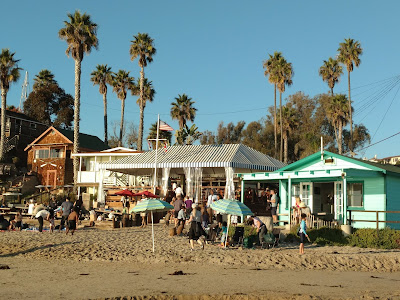 While Kathy explored the tide pools, Dave and Darla solved all the problems of the world. 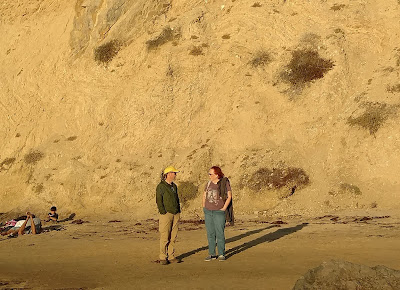 We spent the rest of our time in the bar enjoying tropical drinks and the best mahi mahi spring rolls we ever had. The time passed quickly. Before we knew it, the sun was setting. Folks lined up along the shore to get the best view. 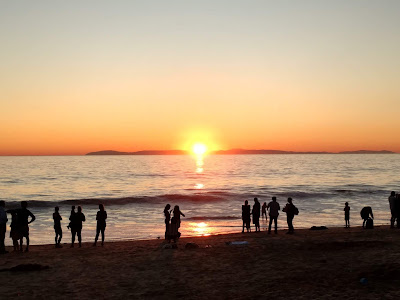 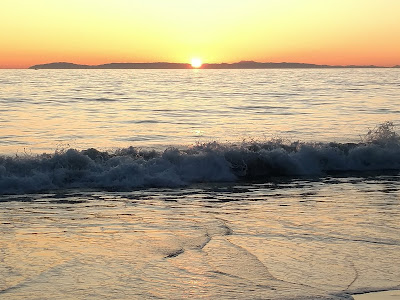 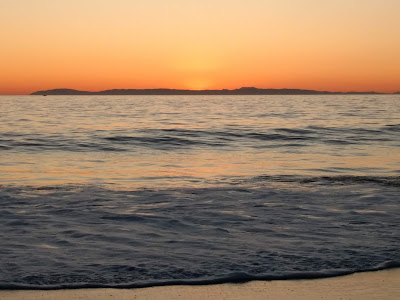 We were seated shortly after sunset. Before our meals arrived, Dave had a near-death experience. If not for the bravery of the restaurant staff, this blog may have ended differently. A group of 8 were seated across from us - grandmom, three young children and two 30-something couples. The men had obviously spent their two hour wait drinking to excess. While one guy was very happy, playing with the kids and chatting with everyone, the other guy was very sullen and belligerent. He ranted and raved about the two hour wait time, the service wasn't quick enough, their table wasn't good enough, etc. After sitting less than five minutes, he told the entire family to get up they were leaving. As the family quickly left, Mr. Belligerent continued to get louder and louder. He was screaming at our waiter. Dave politely asked him to keep it down. He tried to turn his wrath onto Dave, but was intercepted by an armada of wait staff who quickly formed a wall between Dave and the drunk. He was eventually ushered out, but not before threatening to kill our waiter and (which we guess he thought would be so much worse) leave bad reviews on Google and Yelp!

In a matter of minutes, the family's table was reset, new guests were seated and the restaurant continued to buzz along. We were soon tucking into our salmon stuffed with crab... 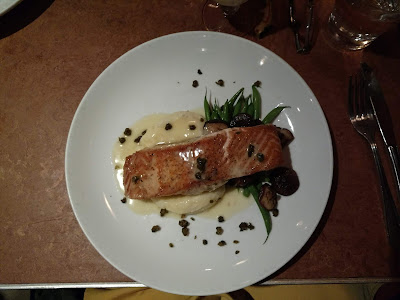 ...and ahi tuna with roasty toasty brussel sprouts and asparagus. 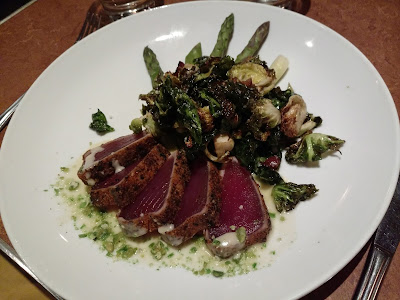 Because of the aforementioned incident, our waiter advised that the restaurant was treating us to desert. He asked us what we would like and we each picked something different. We hadn't realized the desserts were big enough to share. By the time we left, we had to be rolled back to the parking lot.

These are just the first of many more adventures we hope to have this week. Stay tuned.

Posted by Dave'n'Kathy Vagabond Blog at 12:13 AM