Our original plan for today was to meet our friends George and Nan in Stuart, Florida, go for a morning bike ride and brunch, and then join our other friends Jim and Nancy for some music on Stuart's waterfront.  However, Nan got sick, so we rescheduled the visit for music and dinner this Wednesday evening.

Being without an activity plan for the day, we decided to embark on our second paddle of the extensive lake and canal system here in C. B. Smith Park where we are camped in Pembroke Pines, Florida.

Kathy looks like she's ready for a good time! 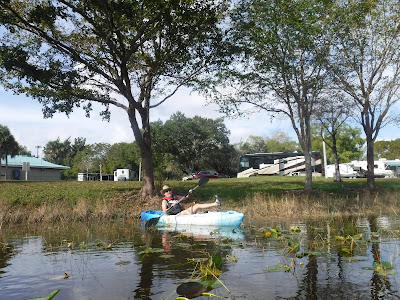 We had barely started onto the water than we spotted the resident flock of ibis hanging out in the shade on one shore of the lake: 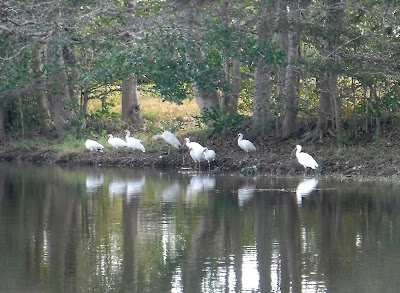 Rounding a bend, we came to our first water tunnel, under one of the many bridges serving park roads and multi-use paths: 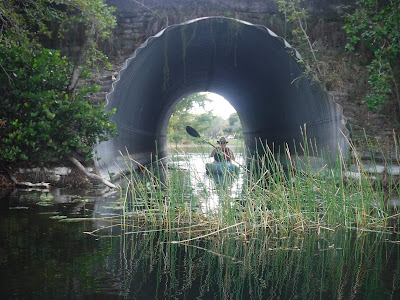 The tunnel led to the outer canal that surrounds the park and connects several lakes.  The western canal, which we were entering, stretches along the east side of a series of soccer fields at the local high school.  We learned on an earlier paddle that soccer balls routinely get miskicked and the errant balls end up in the canal.  Either because they lose track of the balls or don't want to dive into the water, it seems to be standard operating procedure for soccer players to abandon the misbehaving balls.  Kathy had rescued a few soccer balls on our last paddle, so she was on the lookout for more this time.  She was not disappointed: 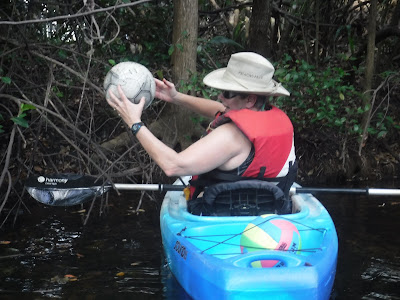 So far so good.  Kathy snagged many more on our trip today, but we were about to abandon our search for soccer balls and begin our wandering through the wilderness of the back canals of the park.  This is what confronted us (note yet another soccer ball photobombing the scene): 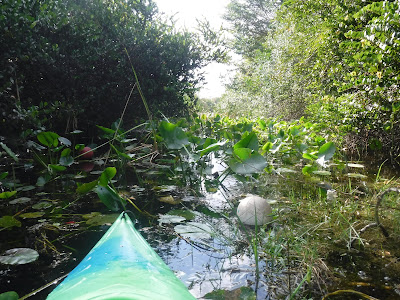 We proceeded from paddling through vegetation, to breaking down our paddles into short, one-sided canoe-type paddles, to grabbing branches and pulling ourselves through thickets.  Luckily, we never grounded out; but we certainly fought our share of adversarial plants: 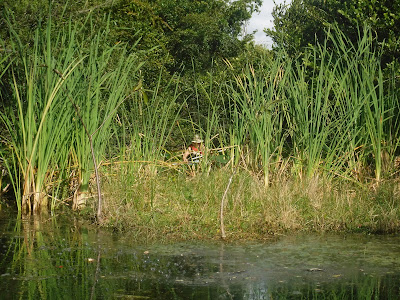 We finally cleared the thick stuff and, as we got back into a paddling rhythm, Kathy spotted four little legs skittering under the trees lining the canal.  She couldn't make out who they belonged to, but as David paddled forward to get a photo, it became clear who the little critter was -- a local raccoon caught out by our surprise arrival: 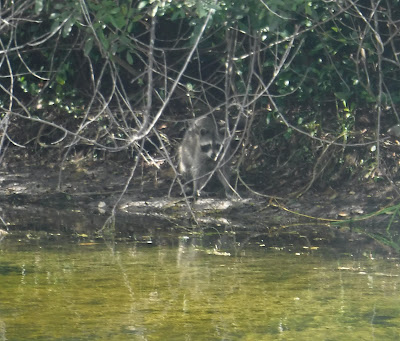 He wasn't the only wild thing that wrongly assumed humans would not invade this pristine back-country wilderness.  We surprised a group of four or five limpets, who put up a squawking defense as they fled down the stream, hoping to escape our threatening paddles waving in the air: 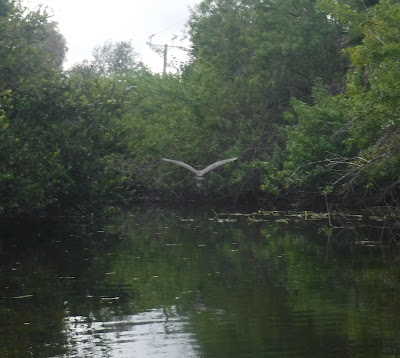 Back out into less wild regions of the park's waters, Kathy spied this first (and only) water lily bloom this season.  It proudly announced its first place finish in the blooming derby, while we recorded the joyous victory: 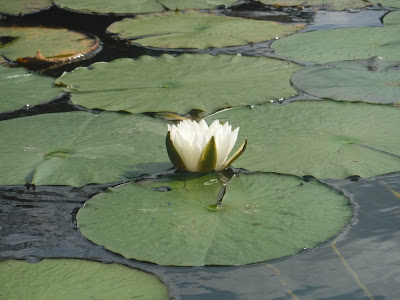 Soon, without knowing it would be so, we began our journey through the World of Sex-Crazed Iguanas.  Apparently, it is mating season, and, all along the shoreline, we could spot either a large, colorful male, strutting his stuff or the less colorful object of his affections sitting impassively and evaluating his performance.  Here was the first male we spotted.  He was so big that he didn't even flinch as we got very close: 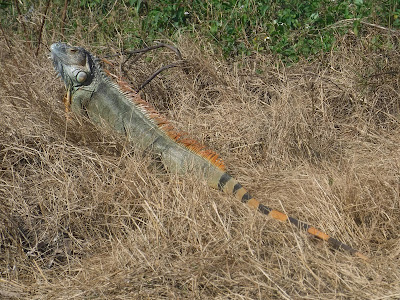 Paddling around a corner, we spotted the parks huge waterslides snaking colorfully in a vertical spiral behind one of the pedestrian bridges.  Note the surrounding trees, which show exactly how windy it can get in this area. 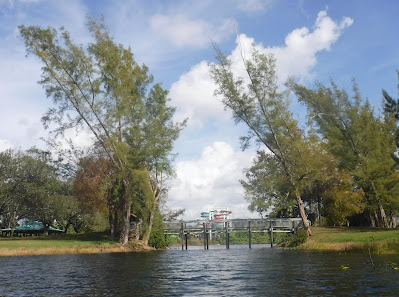 Not satisfied with the wildlife we'd spotted already, we paddled after a group of Muscovy ducks who, preening and picking at vegetation and bugs along the lakeshore, were very tolerant of our passing: 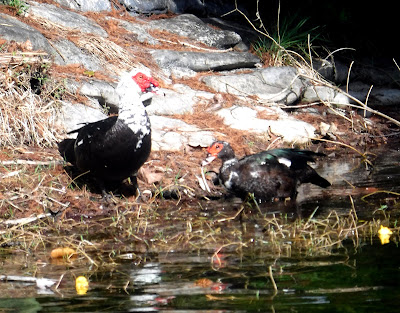 In one section of the park, people were having, or had had, parties of all sorts.  Kathy found bright red roses that had been strewn in the water fresh from some celebration -- 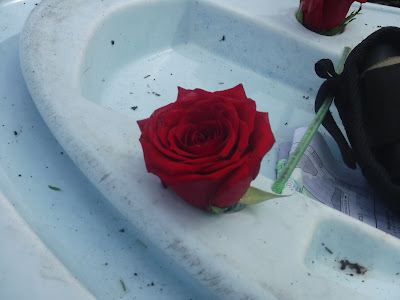 -- and David captured several colorful balloons that escaped service at a huge balloon-fest of a birthday party (in the background): 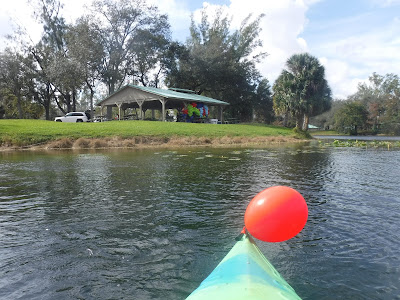 A few pretty yellow blossoms showed their faces shyly in bushes above our gliding: 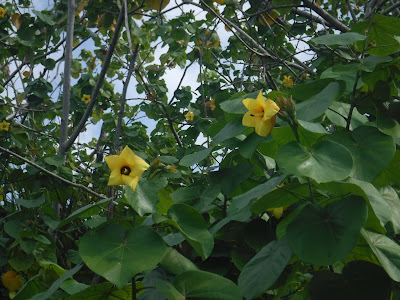 And then, very dramatically, we encountered this large male iguana performing on a branch -- 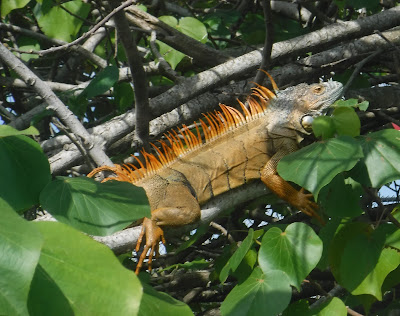 -- for the benefit of the object of his affections: 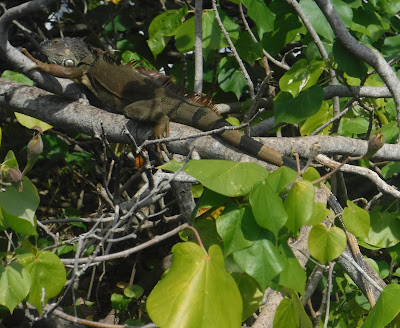 The humans were busy in this part of the park, as well.  We puttered along the course of a fleet of miniature remote-controlled sailboats, as they jibed and tacked around buoys on their course: 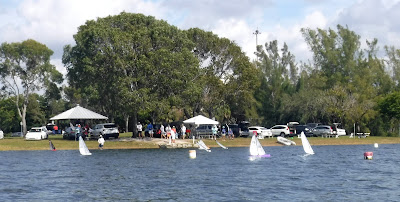 We were nearing where we put in, and the end of our looping course, when we spotted this final male iguana standing alert on the sloping grass near our landing spot.  He did not appreciate our approach and started wagging his head and wattle in threat.  He did not attack, but kept up the defense until we passed. 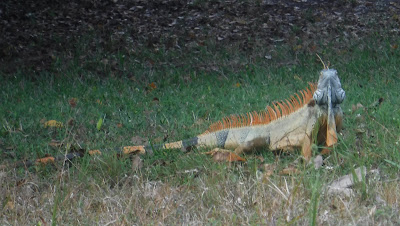 Safely back at our home port, we unloaded all the booty we had collected -- ten soccer balls, two footballs, an (unfortunately) empty bottle of Irish Creme liqueur found bobbing in a backwater, and an empty bottle of Josh Cabernet Sauvignon (one of our favorites) found lost at sea -- along with assorted trash and three rescued party balloons. 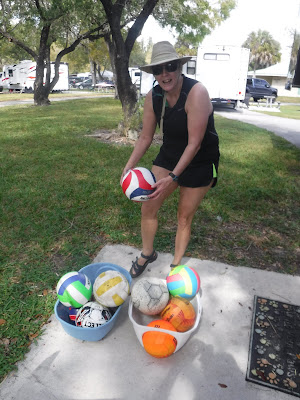 The balls, as shown above, collected on our patio, to be cleaned and distributed to worthy kids in the park.  The balloons took positions, loud and proud, on our Jeep's antenna.  The roses...well, Kathy found a number of fresh red roses and one cute little yellow one, and now those roses grace our dining table: 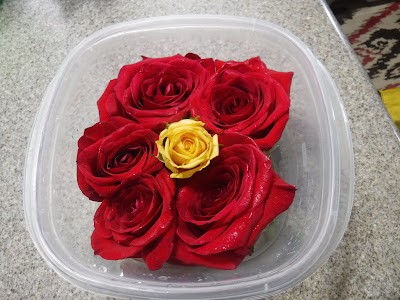 The End.
Posted by Dave'n'Kathy Vagabond Blog at 5:19 PM