The Mount Elmore Fire Tower Loop Hike came up on every search we did for good hikes in the area.  Climbing 1,466 feet in 2 miles, it was good aerobic exercise!  The day was forecast to be very warm, and thunderstorms were forecast to come at 2pm, so we got an early start and hit the trail at 8am.  But this view of Lake Elmore, and grand, 360-degree views of Vermont's Green Mountains were all the inspiration we needed to get going.  Plus, the favorable recommendation from our new friends Allen and Amy of North Carolina was all we needed to know this would be a good hike. 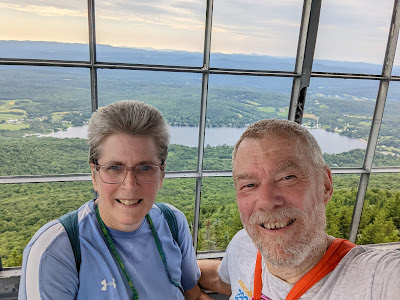 The trail starts innocently enough, passing the ruins of some cabins, where only stone fireplaces remain: 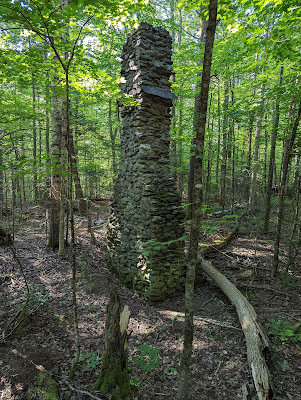 The first part of the trail is an old forest road, or perhaps the original road to the fire tower when it was in use.  The road, which also forms part of the much longer Catamount Snowmobile Trail (open in winter), continues, and ends at the junction of the 1.9 mile Fire Tower Trail and (for us, the return) 2.4 mile Ridge Trail.  Along the way, we were surprised to see YET MORE THIMBLEBERRIES!  This time, we were too early.  The berries hadn't set yet, and all we found were the pretty rose-colored flowers that reminded us of primrose.  We may have to return in a month or so and sample those sweet berries. 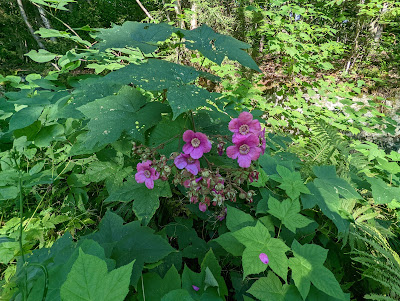 Below, Kathy finds the sign pointing the way up the Fire Tower Trail: 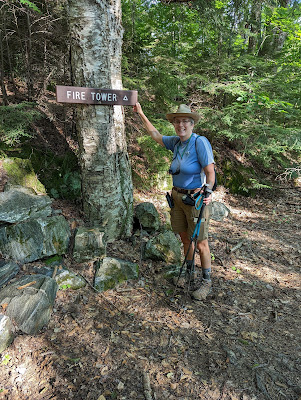 About 1.7 miles up the Fire Tower Trail, one comes to the ruins of the fire watcher's cabin.  All that remains is the fireplace, some stone foundation, an unidentified metal appliance such as perhaps a refrigerator -- 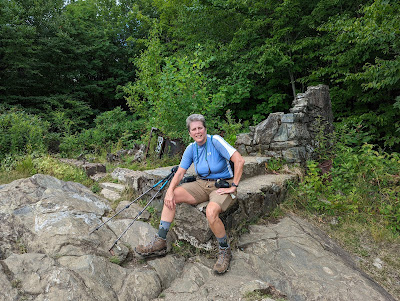 -- and the frame of an old metal bed: 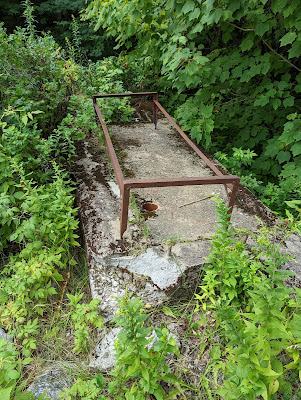 The watchman had a great view from his living room, which David models: 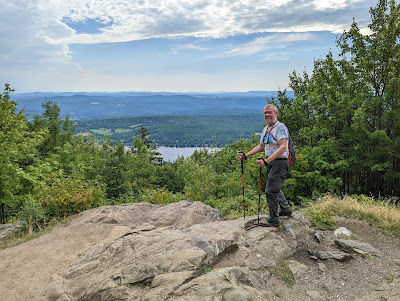 After the watchman's cabin, the trail gets very steep and climbs 295 feet or so in 0.2 miles!  Kathy took time to appreciate the steep grade: 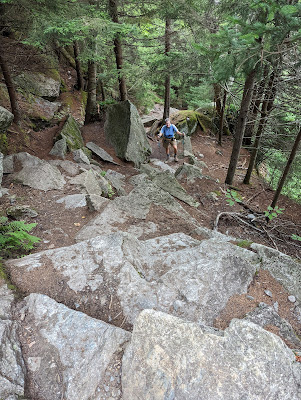 The stone work on the upper trail is worthy of the CCC: 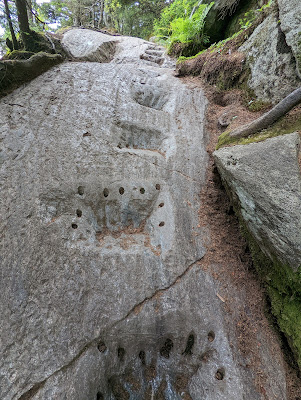 Originally constructed by the Vermont Division of Forestry, and now maintained by the Division of State Parks, the fire tower and watchman's residence were constructed in 1939 following the disastrous New England hurricane. The lookout remained active until 1974. 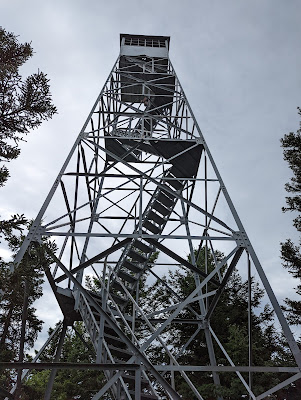 The views from the tower are breathtaking, and span the entire 360 degrees.  Here is the view we had to the southwest: 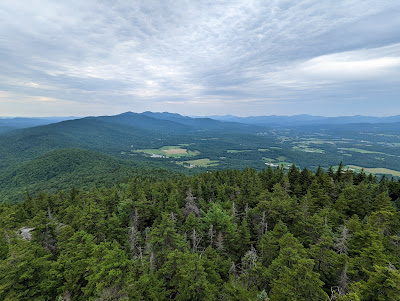 This video show how dramatic the 360-degree view was.

The fire tower was not without its quirky features.  There was plentiful graffiti inside, including this plaintive message from some hiker to "Burrito Girl": 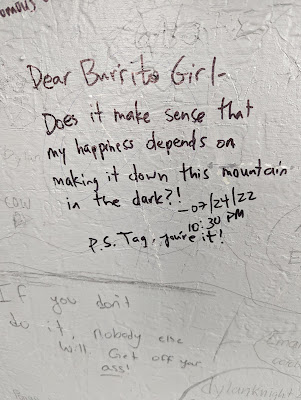 Having filled our souls with views of the ends of the earth, we started down the Ridge Trail from the fire tower, noting the boot print of a hiker we met at the tower, who told us she had come up Ridge Trail: 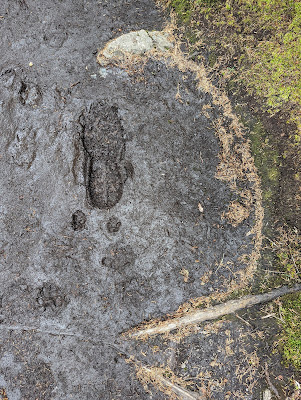 It was only a little over half a mile down from the fire tower to Balancing Rock, a glacial erratic that was left in a position making it look like it is balanced precariously on another rock: 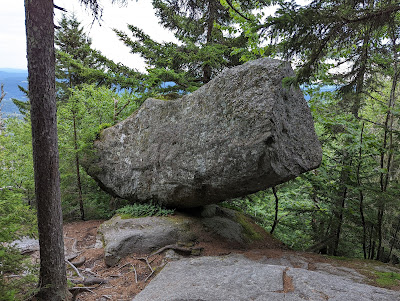 Not so far from Balancing Rock, we ran across this lush, velvety colony of moss -- 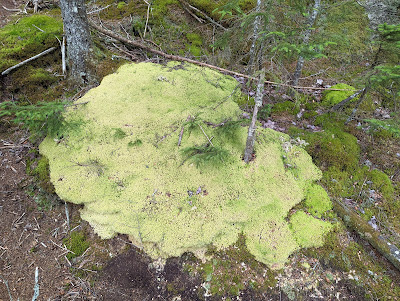 -- and then, perhaps another half mile further on, we examined this strangely skewed growth of wood on a dead tree.  We wondered if it had grown from some injury to the original tree, much as burls do: 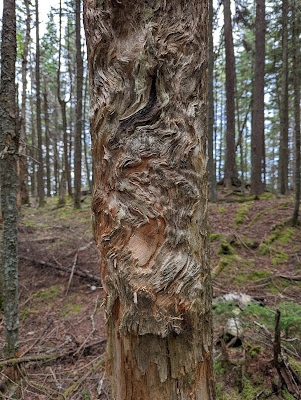 In their earlier hike on this route, Amy and Allen ran across some blue berries that mystified them.  We all tried to identify the berries but failed.  Lo and behold, about halfway down the Ridge Trail, we ran across a low-lying plant boasting the very types of berries that our friends had found.  We snapped this photo and, after the hike, on some deep-diving internet research, Kathy found that this is a plant known as bluebead lily (scientific name Clintonia borealis).  It was satisfying to finally put an end to a botanical mystery. 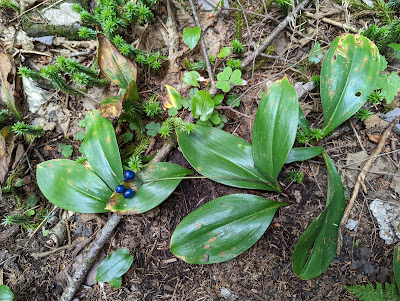 We eventually deduced that the Ridge Trail got its name because it follows the ridgeline -- or shoulder -- of Mount Elmore.  Instead of being a less strenuous, gentler trail with more scenic views, it was filled with climbs down steep banks, hops over granite rocks, and endless dodging of slippery roots.  This is not to say it was an unpleasant trail -- to the contrary, it was a lot of fun, and very interesting.  But it just wasn't what we had imagined from the name.

It still had its surprises.  As we descended, we came across two sets of ponds anchoring broad wetlands and meadows.  We never would have guessed that we would find such habitats on the side of a mountain! 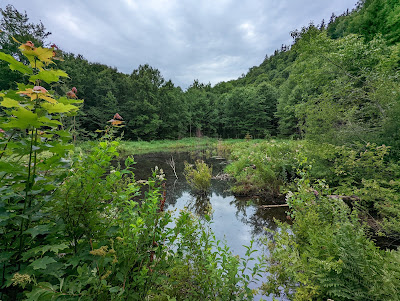 All too soon, the hike was nearing its end.  We were approaching the lollipop stick and our return to the parking lot, when we chanced upon this magnificent colony of fun guys!  We couldn't resist stopping to admire them and wish them well in their mycellial existence: 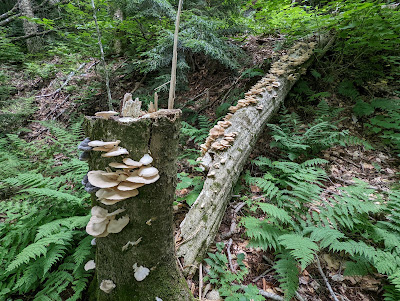 That was it for the hike.  It had grown very warm and humid, and we were sweating heavily, our shirts soaked; but, luckily, the storm predicted for the afternoon had not yet arrived, so we decided to head for lunch to Hill Farmstead Brewery, which was recommended to us by a young hiker we met at the firetower.  He claimed that they make award winning beers and are an interesting destination.

The view of the brewery when we arrived reminded us of the setting for a winery: 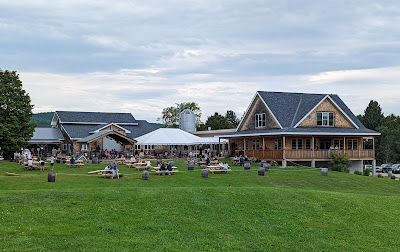 We were informed that, while, as walk-ins, we could sample a few beers and purchase some cheese and crackers to go with it, only those with reservations would be entitled to purchase from the entire beer list and food menu.

This was the oddest business model we have ever encountered -- for a brewery, brewpub or winery.  More oddly, the Hill Farmstead Brewery focuses primarily on craft farmhouse ales, which are too tart for our taste.  Luckily, we each found a less ambitious brew we liked.  Once settled in with cheese and crackers and small glasses of these beer, we decided to sample a farmhouse ale and learned that our original bias was correct.  We did not need to try farmhouse ales.  However, we did find a Russian Imperial Stout that we both like, which we bought in bottles to bring home and share with friends and family (if any should be left after we finish our own tastings of them).

With all this, we still beat the storm home, and little Ruby Cat was excited to learn that she could enjoy her early afternoon walk without fear of raindrops.

Stay adventurous and thirsty, my friends!