We had a great first day at Reelfoot Lake, but boy was it hot! Before our paddle yesterday in the Reelfoot National Wildlife Refuge, we stopped at the Refuge Visitor Center.  We spoke with one of the volunteers, who was new to the area, but had all the maps and brochures we needed to plan several paddling adventures.

Today's adventure took us to the north end of the Refuge known as the Long Point Unit. There are two canoe trails up north -- the West Boat House Canoe Trail and the Goose Pen Canoe Trail. We chose the 2.1 mile Goose Pen because today was going to be another hot one. Thunderstorms were predicted for the afternoon. Because today was Friday the 13th, we didn't want to push our luck with a longer paddle. 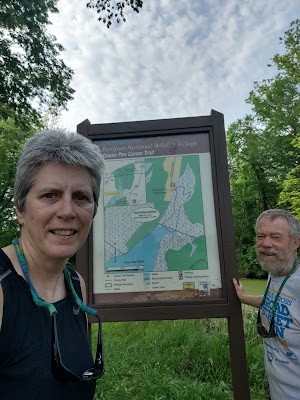 The entrance to the Long Point Unit is actually in Kentucky. Luckily for us, we had our passports with us (just kidding). Truth be told, there wasn't even a sign mentioning we were leaving one state and entering the other. The only difference we spotted was that the lines on the highway in Tennessee were just freshly painted.
We made a quick stop at the Refuge entrance, but there wasn't much to see from the observation tower, so we proceeded to the boat ramp. 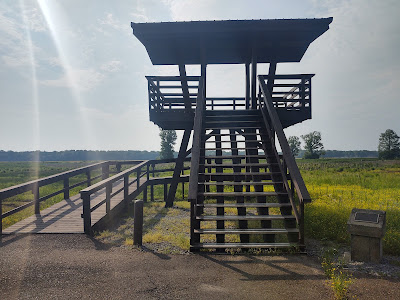 Dusty likes it when we has the trailhead to himself. Behind him are acres and acres of farmland. The land in the Refuge is managed to provide forage for the migrating birds, so some of the Refuge land is farmed. 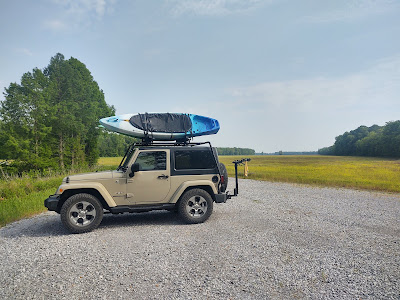 Just across from the trailhead was an observation blind. If you look carefully, you can observe Dave checking out the view. 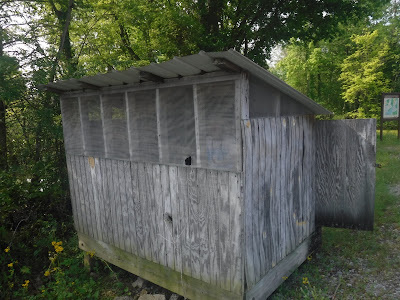 When we first approached the boat launch, we couldn't find the water. All we saw was a carpet of green. We were worried at first that it might be an algae bloom. Upon closer inspection, we realized it was just tiny little floating green leaves known as duckweed. Duckweed flourish by floating atop still or slow-moving fresh water. Their reproduction can be extremely rapid, doubling mass in as few as two days, forming a virtual carpet across the water. 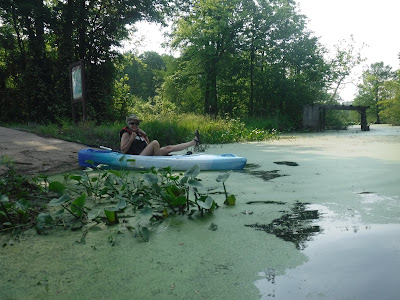 As we began our paddle, we left a wake in the green carpet: 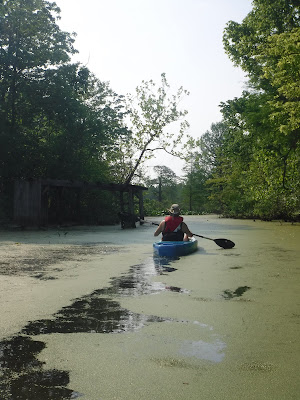 As it turns out, duckweed is very nutritious. Dried duckweed is almost 35% protein. It also contains a lot of amino acids and omega-3s. All that duckweed is perfect for the ducks and other waterfowl that winter over in the Refuge.
We found these really well made bird boxes all along the trail: 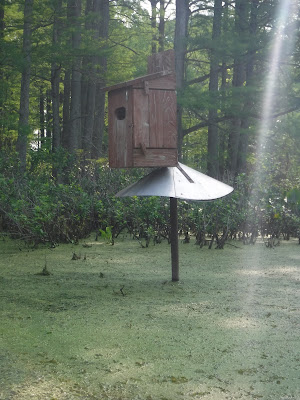 We didn't realize the paddling trail would have interpretive signs. We learned all about the northern map turtle, broad-banded water snake and bluegills. 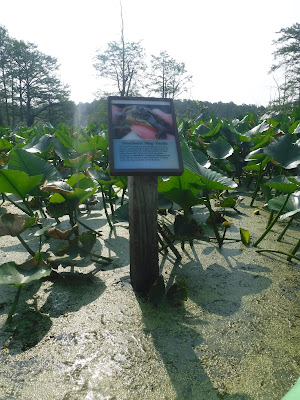 There are a number of channels cut through the slough. Our trail was marked with red diamonds. 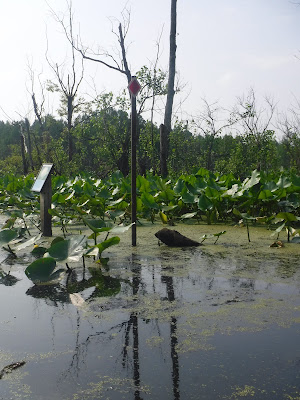 This part of the Refuge reminded us of paddling through the Okefenokee Swamp -- sans the alligators. We actually missed seeing gators. 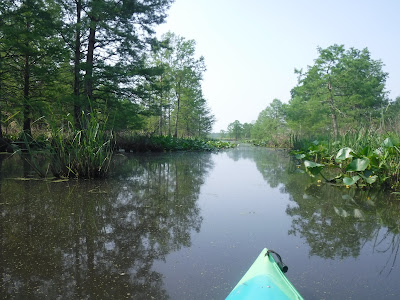 Just after we read about the broad-banded water snake, one happened to swim across our path. Kudos to the Refuge ranger for a well-placed sign. 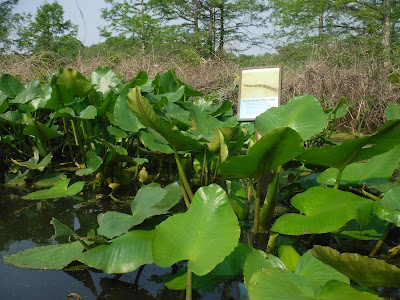 All through our paddle, we kept disturbing a great blue heron. Try as we might, we couldn't get close enough to him for a photo. Here is the heron flying away from us yet again. 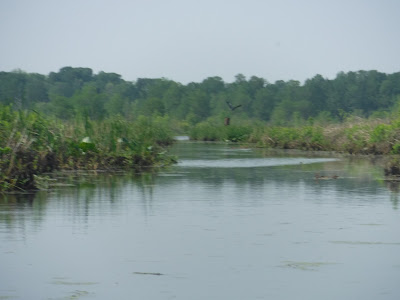 We followed the First Arm south through the Refuge and came out at the very top of the Upper Blue Basin. The first thing we encountered was this hunting blind owned by The Cooper Hole, LLC, a duck and goose guide service. The blind sits 50 yards from the boundary of the Wildlife Refuge. The blind is equipped with the latest amenities, including a television and restroom! 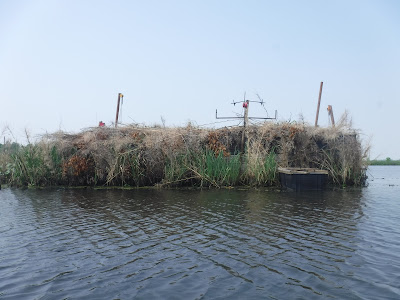 However, like many of the blinds we passed yesterday, it shows some damage, especially after the December 10, 2021 tornado came through. 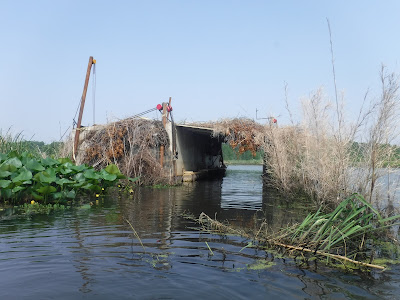 When we planned our RV trip from Virginia to Crater of Diamonds in Arkansas, we never realized how close our route would follow the path of the deadly tornado that began in northeastern Arkansas and then tore through Tennessee and Kentucky. Now that we are here, we are happy to contribute to the economy of the region as they continue to rebuild.
Some Refuge residents seem to have been unfazed by the tornado: 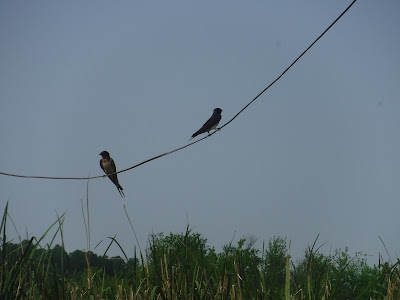 Once we reached the open water of the Upper Blue Basin, we sat back and took it all in. 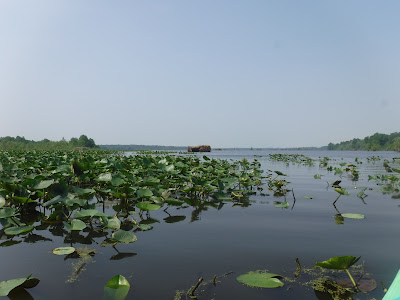 The winds were a little stronger than yesterday. Small waves washed across the lily pads and rolled around the surfaces of the pads. The sunlight reflected in these tiny pools cast rainbows across the surface of the water. 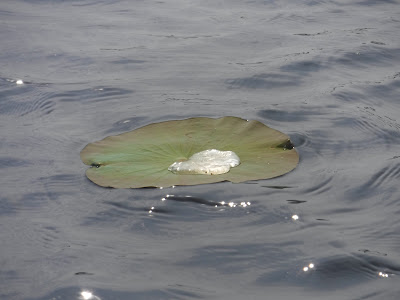 With the day heating up, we turned our kayaks back to the trailhead. We followed the First Arm Ditch back into the Refuge. Click the following link to watch this 360-degree video showing the open channel. 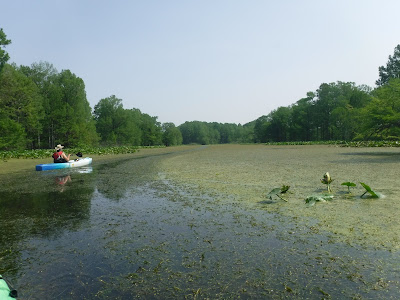 Because the channel is so shallow, we had to turn our paddles backwards to avoid gathering plant life. The shallow channel also meant that fishing boats rarely come into this area. The entire time we paddled, fish were jumping back and forth across our path, and there were no fishing boats nearby. 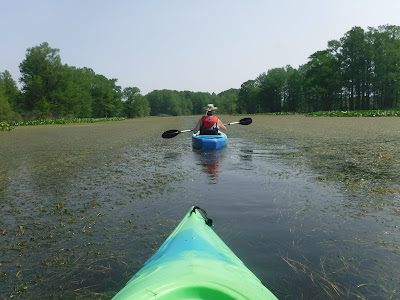 Our paddle was just over two miles and took about two and a half hours. We were off the water by 11:30. The thunderstorms came as promised around 3:00 p.m. It may be a couple days before we get back out, but we are hoping for one more trip on the lake. Stay tuned.
Posted by Dave'n'Kathy Vagabond Blog at 5:01 PM

Older Post Home
Subscribe to: Post Comments (Atom)
"Climb the mountains and get their good tidings. Nature's peace will flow into you as sunshine flows into trees. The winds will blow their own freshness into you, and the storms their energy, while cares will drop away from you like the leaves of Autumn." -- John Muir
"Not all those who wander are lost"
-- J. R. R. Tolkien
(from the poem, "All That is Gold Does Not Glitter," quoted in the trilogy, "The Lord of the Rings")