It's our last day here in Natural Bridge, Virginia. We decided to visit the Natural Bridge State Park. When we lasted visited in 2015, the Natural Bridge was privately owned. The Commonwealth of Virginia took over and the state park was dedicated on September 24, 2016.  Now the park is more than just the bridge; beautiful forests and rolling meadows showcase the area’s karst terrain and vistas of surrounding mountains and the James River valley display nature’s splendor.

Here we are at the trailhead to the Cedar Creek Trial: 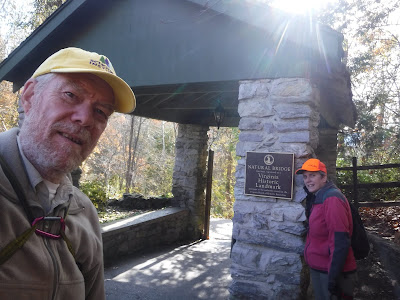 The trail follows Cascade Creek down to Cedar Creek. We stopped to admire one of the ancient Arbor Vitae trees that line the trail. 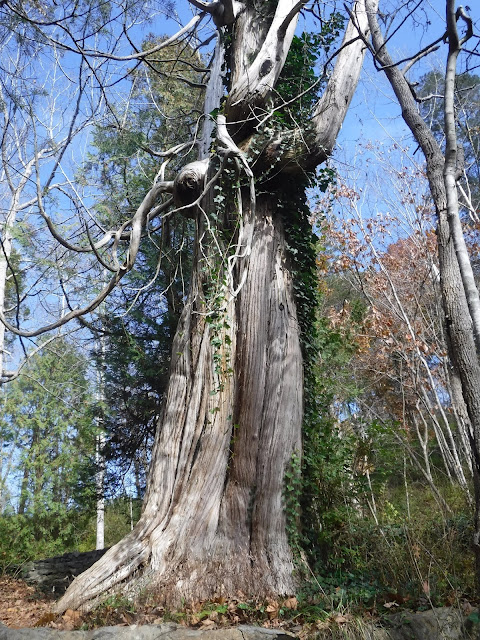 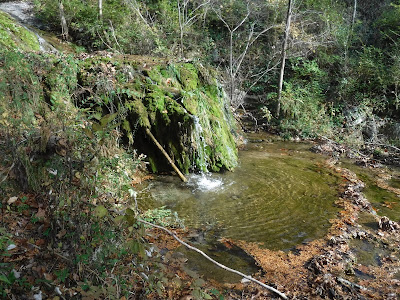 The Natural Bridge is a geological formation in which Cedar Creek (a small tributary of the James River) has carved out a gorge in the mountainous limestone terrain, forming a natural arch 215 feet high with a span of 90 feet. It consists of horizontal limestone strata, and is the remains of the roof of a cave or tunnel through which the creek once flowed. Natural Bridge has been designated a Virginia Historic Landmark and a National Historic Landmark.  It has been depicted in many famous artworks and was cited by Thomas Jefferson as, "the most sublime of Nature's works...." 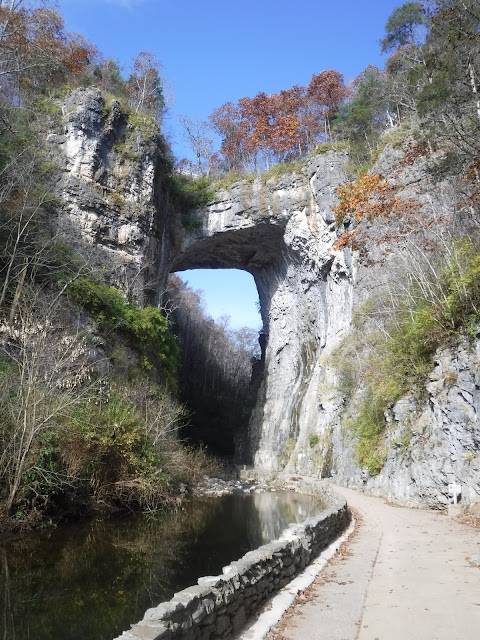 Even though we knew we had visited before, the sheer size of bridge is still impressive. 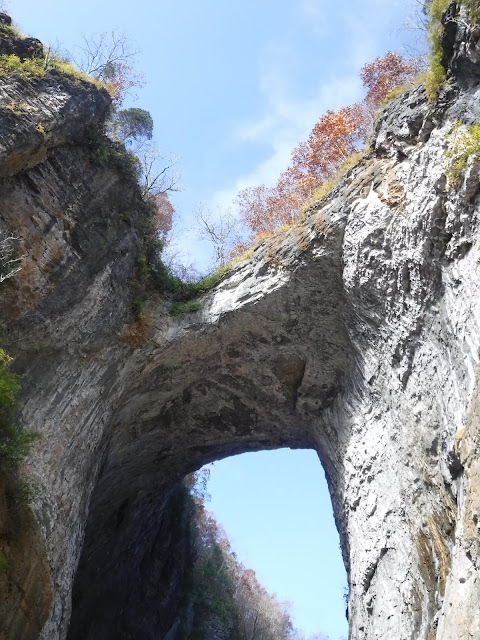 Natural Bridge was one of the tourist attractions of the new world that Europeans visited during the 17th, 18th and 19th centuries. Vacationing guests from all over the world took day trips from Natural Bridge on horseback or horse-drawn carriages to explore the countryside. This Natural Wonder was a big deal back then. It was the Grand Canyon and Arches of its time. 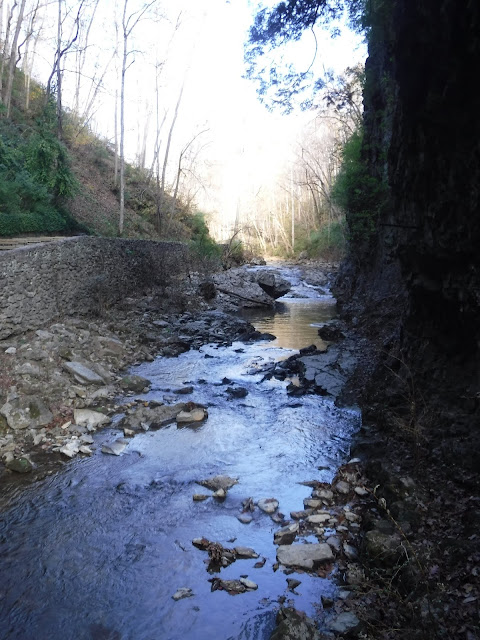 We continued along the trail to the Monacan Indian Living History Exhibit. Guests have the opportunity to step back in time over 300 years to visualize what life was like in a typical Monacan Indian settlement. 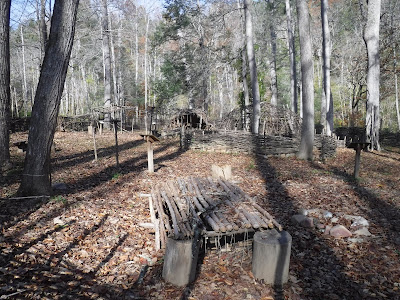 We made a short detour to explore an old cave that was used to collect potassium nitrate from bird and bat droppings. The guano was used to make saltpeter which is used in gunpowder. 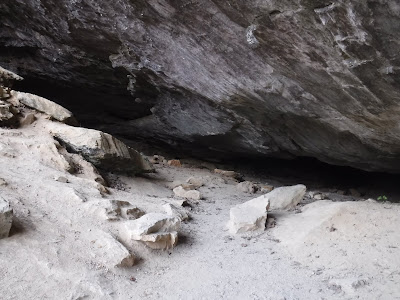 Cedar Creek is a 12 mile-long tributary of the James River.
From the Natural Arch to Lacy Falls is about a mile long hike along a well maintained trail. 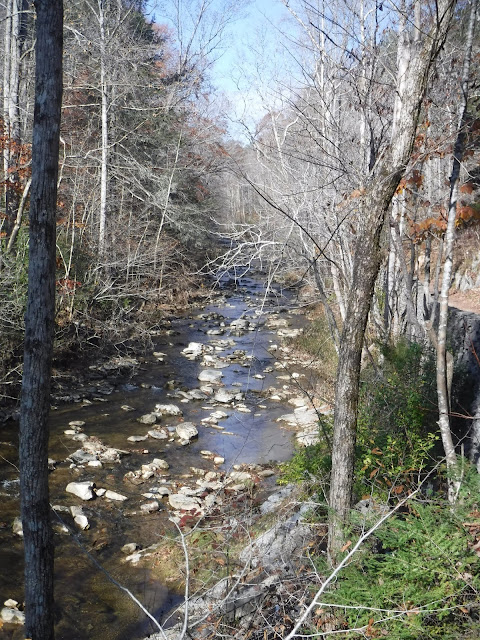 The trail came to end at Lace Falls: 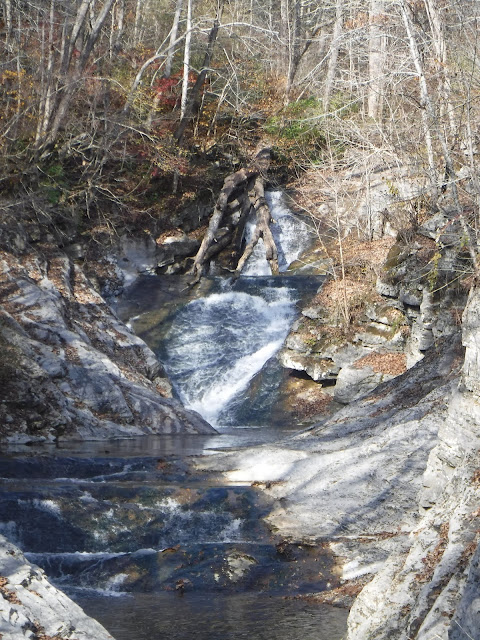 On our way back to the trailhead, we poked our heads inside the Lost River Cave. In 1812, workmen from the Saltpeter Cave heard the waters of the underground Lost River, and blasted the opening to it pictured below. A water main was attached to transport water to the hoppers and kettles used to extract the nitrate from the cave. Legend has it that, in later years, several unsuccessful attempts were made to locate the underground channels of the Lost River. Colored dyes and flotation devices of all types have failed to determine the source and final destination of this mysterious subterranean river. 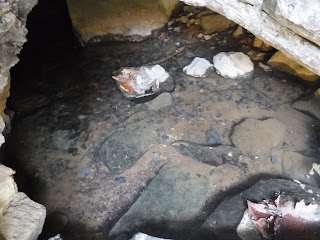 There was still some Fall color along the trail. 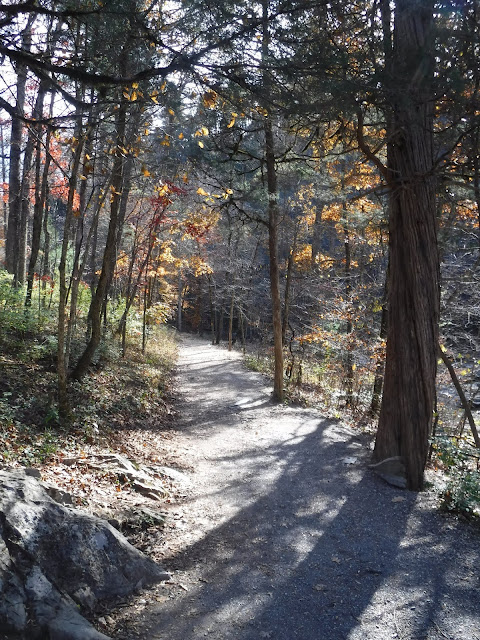 When researching trails to hike in the park, Dave learned that a J.R.R. Tolkien quote could be found, etched in a slab along the Cedar Creek Trail. On our way back, we kept scanning the rock walls and eventually found the quote:
“Still round the corner there may wait
A new road or a secret gate
And though I oft have passed them by
A day will come at last when I
Shall take the hidden paths that run
West of the Moon, East of the Sun.”
J.R.R. Tolkien
The excerpt is from a longer poem, "Roads Go Ever On," which is also known as "A Walking Song," fictionally written by Bilbo Baggins; verses of it are sung at various places in The Hobbit and The Lord of the Rings.  The verse is starting to be eroded by time, but with patient reading, you can make it out on the stone slab: 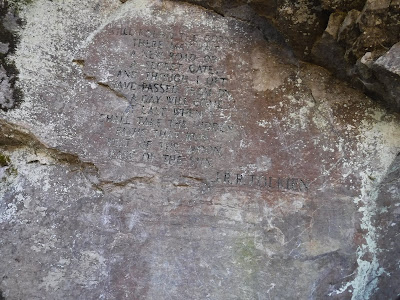 After our visit to the Natural Bridge, we drove over to the trailhead for the Buck Hill Trail. Buck Hill is home to The Caverns at Natural Bridge. Having toured several caverns recently, we were more interested in the two mile loop hike around Buck Hill.
Below, Dave is ready to take on the trail. Kathy offers thanks to the Mid Week Crew of Roanoake for providing this comfy bench with a view. 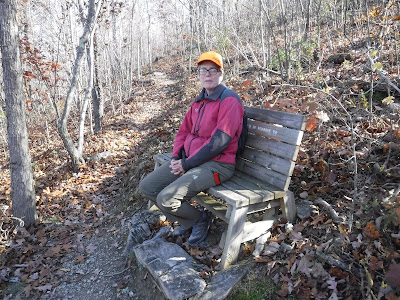 From the summit of Buck Hill we could look across to the Blue Ridge where we hiked the other day. 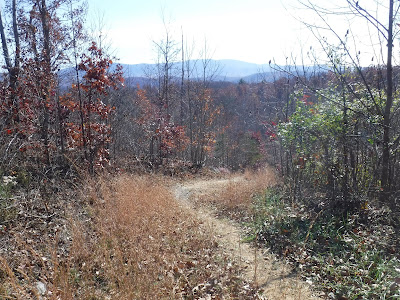 What goes up, must come down! The loose limestone gravel made coming down a challenge. 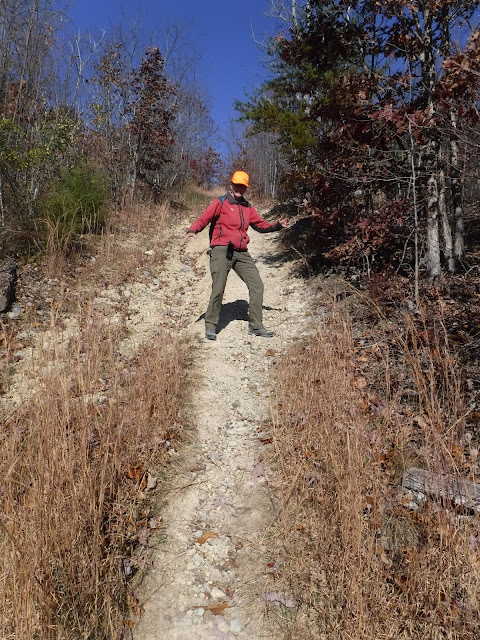 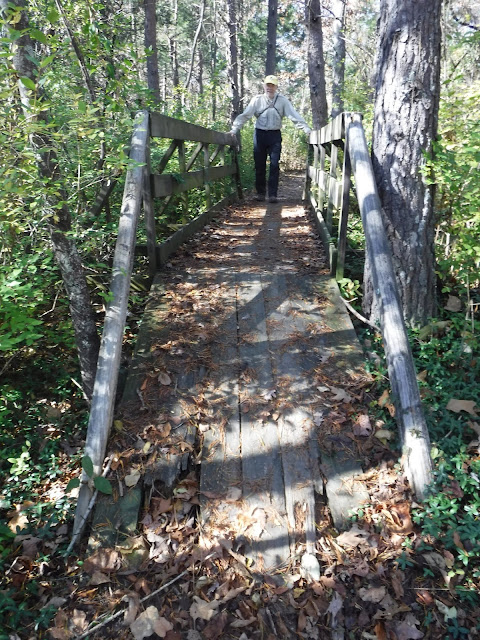 We discovered the remains of an old mansion, but were unable to learn any more on the history of this property. 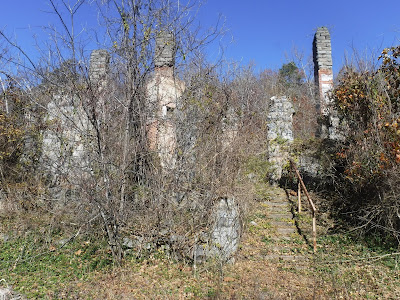 We finished our hike and returned to camp. The weather was nice enough to cook over the campfire.

We move back to Bull Run tomorrow, where we'll view the Festival of Lights with family and prepare for our trip to Philly for Thanksgiving weekend.

Older Post Home
Subscribe to: Post Comments (Atom)
"Not all those who wander are lost"
-- J. R. R. Tolkien
(from the poem, "All That is Gold Does Not Glitter," quoted in the trilogy, "The Lord of the Rings")