We ran again this morning, so, as the gorgeous, warm afternoon beckoned us outside, we looked for a shorter hike nearby.  We had wondered about Gouldsboro State Park, which is not far from us and is connected to Tobyhanna State Park by the 3.2-mile Frank Gantz Trail.  We hopped over there planning to hike a portion of the trail that looped around Gouldsboro Lake, which is a man-made lake.

The following is excerpted from a page on the Pennsylvania State Parks website describing the history of the lake and park:

The name Gouldsboro comes from the village north of the park that was named for Jay Gould, the New York railroad tycoon. One of the railroads he owned was the Erie-Lackawanna.

From about 1900 to 1936, Tobyhanna and Gouldsboro lakes were the site of active ice industries. The ice was cut from the lakes during the winter and stored in large barn-like structures. During the rest of the year, the ice was added to railroad boxcars hauling fresh produce and meats destined for East Coast cities. Boxcar loads of ice were also shipped to cities for use in family iceboxes.

Here we are at the trailhead: 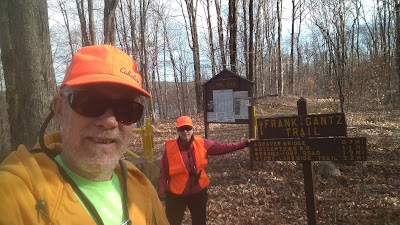 But we got ahead of ourselves.  In order to get to the trailhead, we first had to drive a 7-mile gravel Forest Service road -- 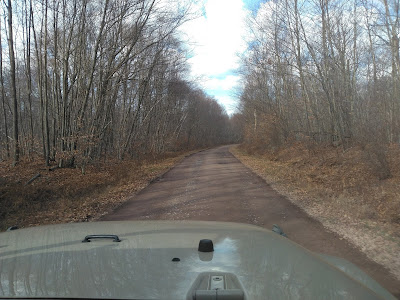 -- then park at the Gouldsboro Lake boat ramp and stand in awe, gazing at the lake -- 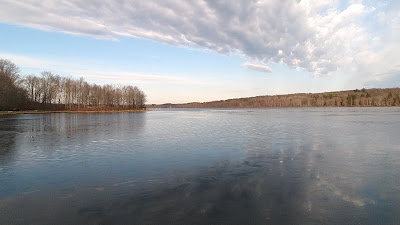 -- and watch people out on the lake dock, who were fishing and just enjoying the sunny day: 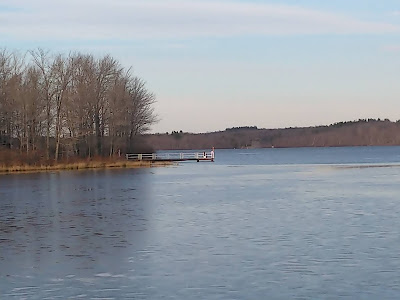 Now we get back to the hike.  The Frank Gantz Trail marches south along the western shore of Gouldsboro Lake.  We got some glimpses of the lake on the trail, but not as many as we had hoped.  We imagined that the lake would mainly be hidden during the leafy Springs and Summers: 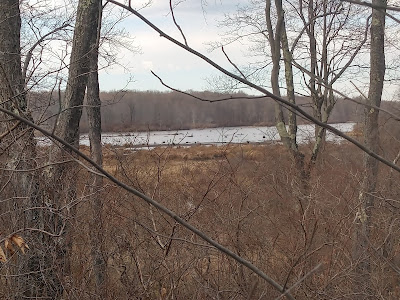 Within 7/10 of a mile or so, we arrived at Beaver Bridge, obviously named for the beaver dam we could see immediately upstream from the bridge.  This dam slowed the stream flow so that the beaver -- 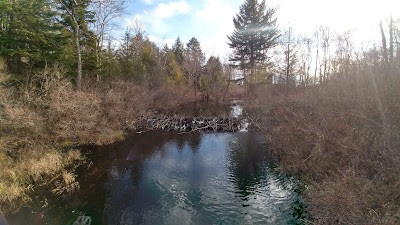 -- could take maximum advantage of the wetland s/he created below the dam (more on this later): 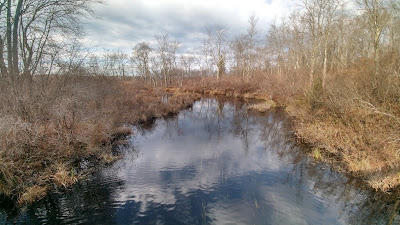 We made this a short hike, and so agreed that we would turn around at the sooner of 1.5 miles or when we could see the lake again from the other side as we looped around the south end of the lake and started up the east lakeshore.
Within 2/10 of a mile of our turnaround point, we arrived at the Steamtown Railroad tracks: 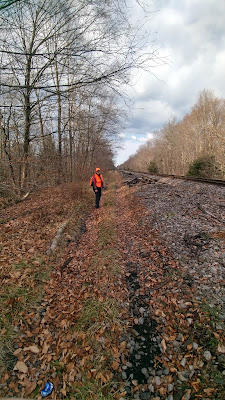 If you recall from the State Parks summary above, these had previously been the tracks of the Erie Lackawanna Railroad.  The tracks stretched southward in the photo below, while the Frank Gantz Trail continued across the tracks and headed southeast toward Tobyhanna Lake (on the left in the photo below): 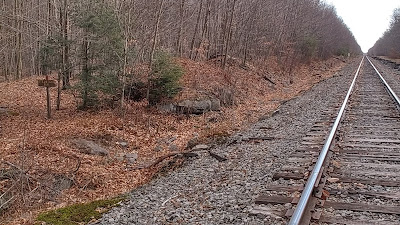 The Steamtown Railroad is based at the Steamtown National Historic Site, where a railroad museum and heritage railroad are located on 62.48 acres in downtown Scranton, Pennsylvania, at the site of the former Scranton yards of the Delaware, Lackawanna and Western Railroad. The museum is built around a working turntable and a roundhouse that are largely replications of the original DL&W facilities. The site also features several original outbuildings dated between 1899 and 1902. 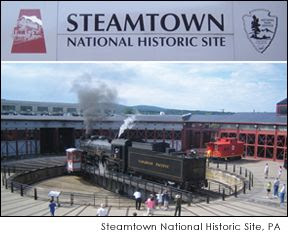 All the buildings on the site are listed with the National Register of Historic Places.  Several working locomotives take visitors on short excursions through the Scranton yard in the spring, summer, and fall. Longer excursions are scheduled with separate tickets. These include a ride on a Pullman coach and longer trips to various nearby towns, including the Lackawanna River valley and Carbondale, Tobyhanna and Moscow, Pennsylvania. On rare occasions, excursions are run to the Delaware Water Gap, to Cresco, Pennsylvania, and East Stroudsburg, and Gouldsboro, after which our lake was named, and which sits only a few miles from the state park.

Unfortunately, we couldn't hike too far along the railroad tracks or lake, because it was time to turn back.  We retraced our steps until we reached Beaver Bridge again.  This time, Kathy headed downstream toward the lake on a side trail she spotted, while David shot this video of the beaver dam at Beaver Bridge. 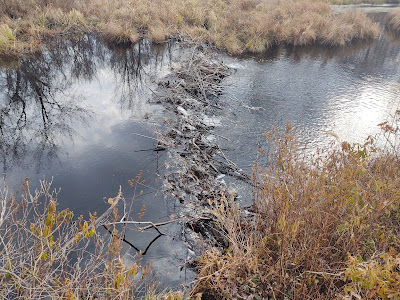 We had this figured out now.  The beaver built a dam upstream to slow the flow of water into this wetland area, and then dammed the bottom of the area to spread the water.  While we were sure that her/his lodge was somewhere in this flooded wetland area, we weren't able to spot it.
While Kathy was down exploring, she had a notion that David was taking her photo of video from the bridge, so she snapped this rejoinder photo of David on the bridge: 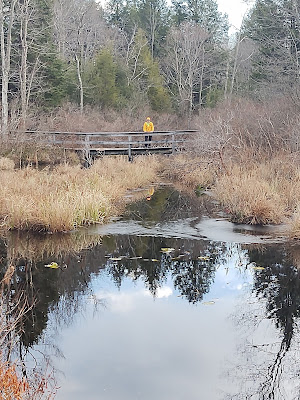 It was only about 3/4 of a mile back to our trailhead, and we made fast progress.  David got hung up under a fallen tree he tried to crawl under, but it didn't slow us down: 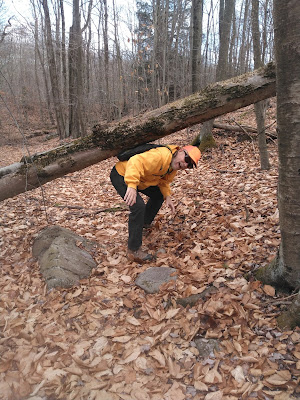 Soon, as we were nearing the trailhead, we spotted this road marker, which we took to be a military road sign.  We are not sure what its meaning was, but it was interesting to spy it in the wooded area off the trail: 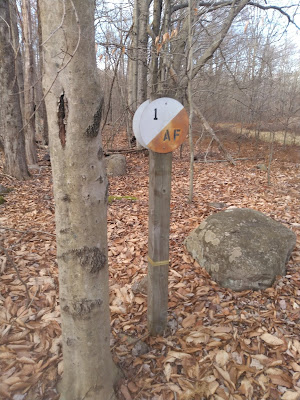 When we started our hike, we did not sign the trail register, but we were so taken with the rewards on the Frank Gantz Trail that Kathy thought it would be appropriate to give kudos in the trail register.  Here she is acknowledging and thanking those unknown people who made this trail possible: 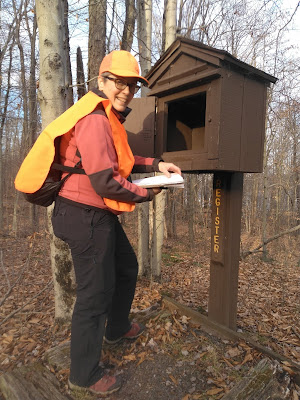 By now, it was after 3:00 pm, and we needed to get back to the homestead to give Ruby Kitten her afternoon outing.  We were able to do that before sundown, and thus ends another day on our Tobyhanna stop for the DavenKathy Vagabond Blog.

Older Post Home
Subscribe to: Post Comments (Atom)
"Not all those who wander are lost"
-- J. R. R. Tolkien
(from the poem, "All That is Gold Does Not Glitter," quoted in the trilogy, "The Lord of the Rings")