As we slowly settle in here at our campground in Lancaster County, Pennsylvania, we're starting to scout out some interesting places to hike, bike or paddle.  After delivering a care package to our daughter in Philly this morning, we took a drive out to Middle Creek Wildlife Management Area to see what it offers.

We had been here back in 2015, and had visited on April 12, 17 and 28 of that year.  Check out this blog entry if you want an overview of the preserve.  While we had hiked Middle Creek Trail on April 17, 2015, we decided it was a good 2.25 mile stretch of the legs after spending 2 hours driving to and from Philadelphia in the Jeep.  As often happens, some of the photos we took back in 2015 are eerily similar to some of those we took today, but -- what the heck -- we'll show you what we liked from this year's hike.

Here's Kathy at the trailhead: 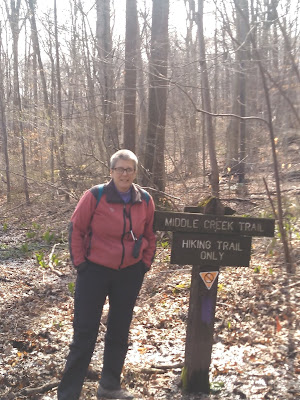 As you can see, we're a few steps ahead of Spring.  The trees are bare of leaves or blossoms, and last year's dead leaves still litter the ground, with little to break their tawny blanket of things such as ferns or wildflowers.

David didn't waste any time snapping pictures of Middle Creek, which was flowing a little turbid after yesterday's heavy rain: 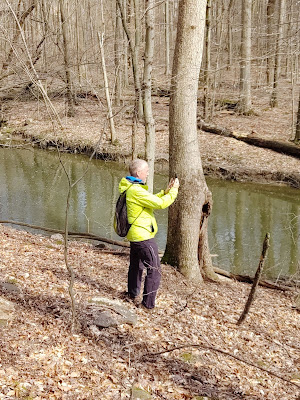 Even with the naked trees and the cloudy water, the stream still had a merry, burbling sound, and the sun danced cheerily off the little riffles.  A sign says the stream may have been stocked with trout this month, but we didn't spot any. 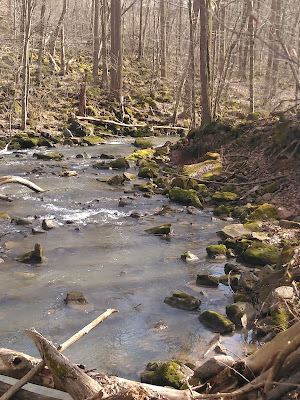 This was the prettiest cascade we saw along this stretch of Middle Creek: 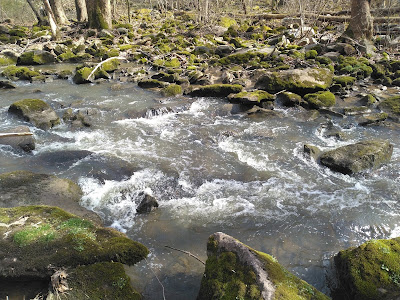 The trail is pretty soggy after the rains, and there are areas that must be wet most of the time, because boardwalks have been constructed through them, and the logs and rocks on either side of the boardwalk carry heavy caps of moss: 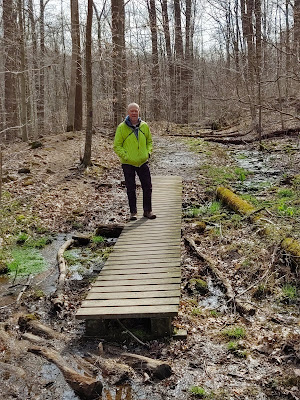 The only green we saw, other than thick, rich moss, was the sprouting skunk cabbage wherever a drainage descended toward the creek: 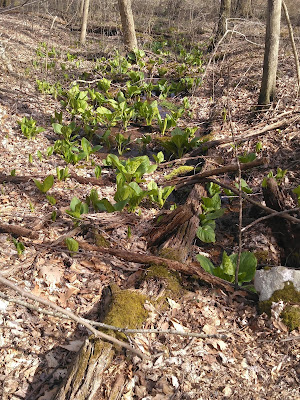 Look carefully, and you'll spot a variety of fungi: 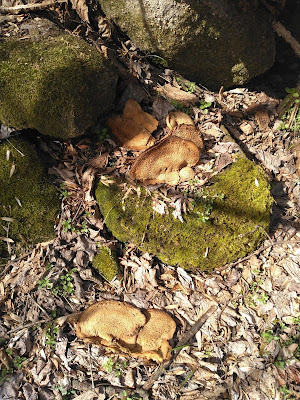 The fungi we spotted are all unusual, both in the photo above and the photo below: 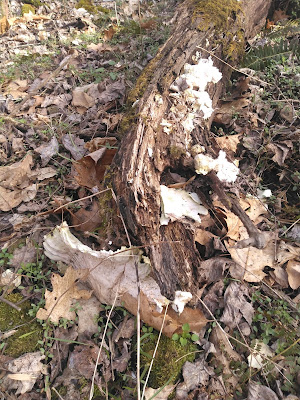 Toward the end of our hike, we encountered another boardwalk, which was heftily constructed from large timbers and hewn planks.  It seemed as straight as much of the trail, which had been a trolly line that was part of the Ephrata & Lebanon Traction Co., which operated a trolley line along Middle Creek from 1912 to 1931.  The line started in Ephrata, running north to Hopeland and then followed Middle Creek across the South Mountains to Kleinfeltersville. From there it followed what is now PA Route 897 through Schaefferstown, Reistville, Iona and into Lebanon. 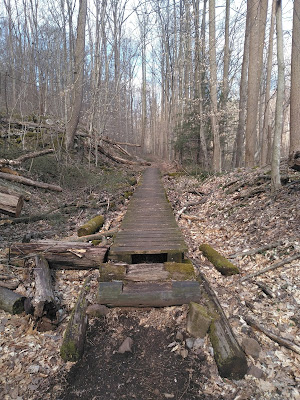 We turned around after about 1.25 miles, where, just opposite us, a private cabin graced the opposite shore of Middle Creek.  Not too shabby.  To the left in the photo below, a tree bears the purple blaze of the Middle Creek Trail: 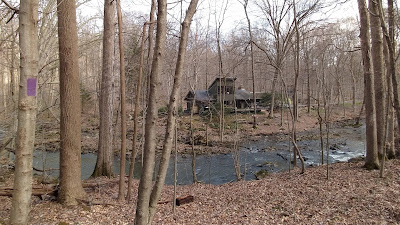 Just where we turned around, a cute little wooden bridge crossed a drainage near the creek.  From its construction, it was clear that the designer had fun with this one: 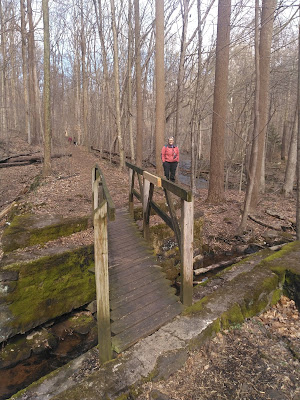 We finished out our hike and took copious notes on the boat ramp for kayaking and fishing, as well as other possible trails.  You'll see further blog posts about Middle Creed Wildlife Management Area in the near future!
Posted by Dave'n'Kathy Vagabond Blog at 6:45 PM