Scouting the Eclipse in Uvalde, Texas

We're already excited about the Solar Eclipse in April 2024!  We agreed with our friends Jane and Kim to help scout out possible viewing locations with maximum totality duration and best chance of weather.  Since the line of totality will run in a southwesterly-to-northeasterly direction from near Piedras Negras, Mexico, on the U.S. border, through Maine, and totality duration will be the greatest the further south one views the eclipse, it was pretty easy to conclude that we should explore South Texas just north of the Mexican border.

The largest town in that area is Uvalde, Texas, which is about a 1.5 hour drive west and south of San Antonio.  We found a rustic campground near Uvalde called Chalk Bluff River Resort and set down levelling jacks for a few days in order to have enough time to scout the area.

The setting for our campground is pretty striking, with sheer limestone bluffs rising over the Nueces River, which runs along the back of the campground: 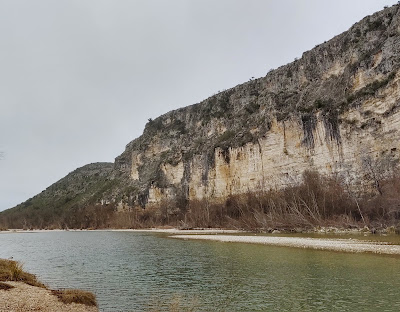 The Nueces River is not large -- most of it looks wadeable -- but what is most striking about it is its wide streambed of rounded limestone rocks that glisten white in the sun.  Here is a view east along the river -- 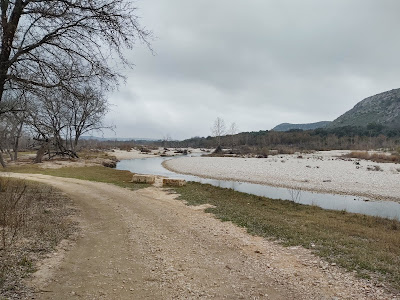 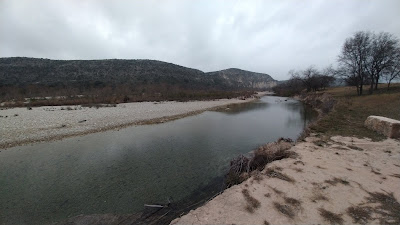 The current owners bought the campground recently and are working hard to spruce it up.  It looks like it was established in the 1950's or 1960's, and most of the facilities have not been renovated since then.  It is huge, though, and boasts 32 full service RV sites, 60 furnished, but very rustic, cabins (many with air conditioning), and 100 tent campsites.

While the campground's website mentions that it offers animal feeding and petting, we had no idea what a menagerie we and the cats would be wandering into.  Our first afternoon, we were greeted by this roaming female turkey (pea hen?), who made it her business to wander over to our campsite every afternoon and every morning, just about the time we walked Baxter and Ruby, to see what we were doing.  When she wasn't doing that, she was frequenting the goat pen across from us, harassing and chasing the cute little goats. 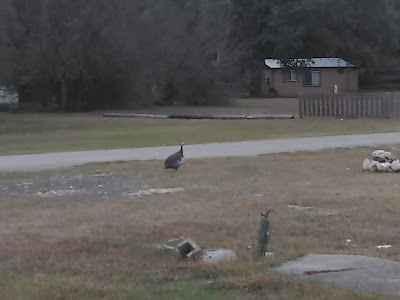 It wasn't surprising to find some horses, who were very friendly (obviously hoping for a snack), and we obliged them with fistfuls of fresh grass from our side of the fence: 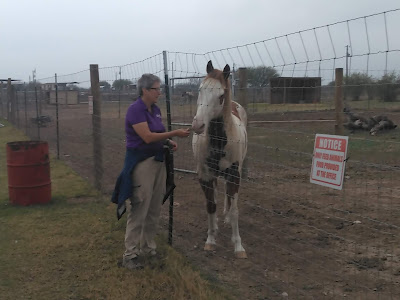 Some pens had deer (labelled on the sign as, "Axis Deer"), and they were equally friendly and desirous of handouts: 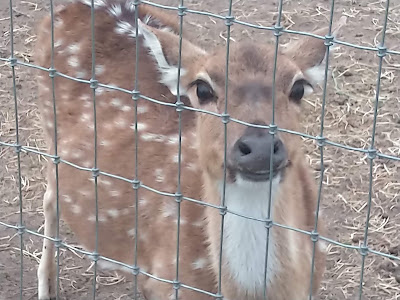 Along that line, however, South Texas is home to more wild deer than we have seen in any region we have visited.  The campground itself is home to two or three small herds, which we would rustle up on every morning's coffee walk.  As you can imagine, deer hunting is popular in the region and, unfortunately, we spotted many deer on the roadside that had become the victims of 75 mph drivers.

One pen in the campground was home to rabbit-like rodents that we suspect were agouti: 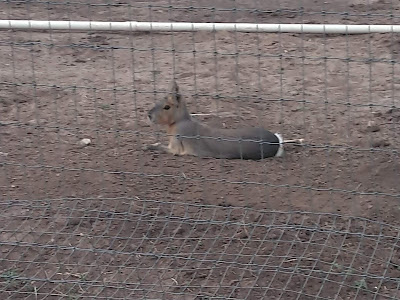 Yet another, more exotic friend in the pens was this sweet ostrich that only begged food and did not hiss or bite (at least when we were greeting it): 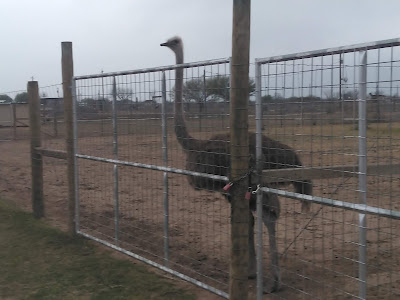 But the most interesting animal of all was this very friendly camel, who, when s/he spotted us this morning, made a beeline toward us and begged for some sweet, fresh grass.  David obliged him/her and made a friend -- and still has his hand, to boot: 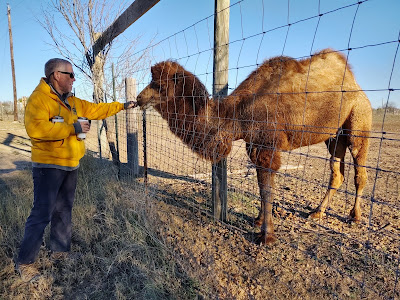 The results of our Eclipse Scouting Expedition are confidential and secret, to be shared only with Jane and Kim.  However, we can report on one unique site we discovered, which could be the location for eclipse viewing because of its open hilltops -- Ox Ranch: 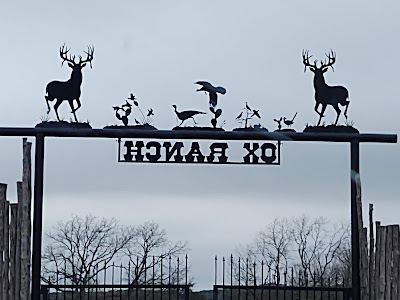 To our dismay, it is a so-called "hunting ranch" or "shooting ranch."  The only purpose of visiting it is to eat and sleep in luxury while spending your days hunting the innocent creatures who graze freely, unaware of what fate awaits them: 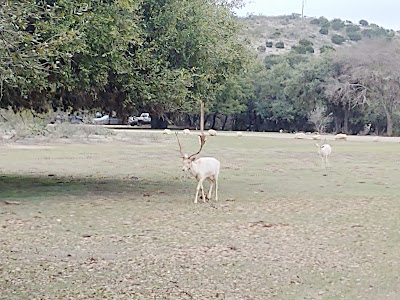 We stopped into the lodge to inquire about what pricing would be available for a visit to spend a day photographing the eclipse.  We had a hunch it would not be cheap when we saw the lodge: 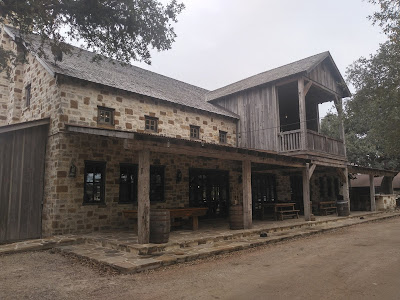 The lodge interior only confirmed our suspicions, and the only question left in our mind was how much such a visit would set one back: 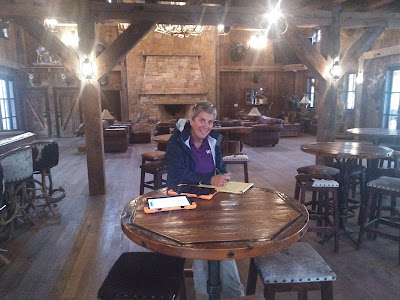 Suffice it to say that, if you have to ask the per-night price, you can't afford it.  We dutifully reported the idea to Jane and Kim, but came away feeling poorer just for having been told the price, and felt that there would be many cheaper options to enjoy the eclipse in this area.

We've finished our scouting project, and tomorrow we head over to the Gulf Coast near South Padre Island.  Many snowbirding RV'ers like to spend the winter there, and we're curious about the area.  We'll proceed on along the Gulf Coast, staying briefly at Jamaica Beach RV Resort in Galveston, one of our favorites, and Sea Rim State Park, near Port Arthur, another favorite, before moving on to an extended stay for Mardi Gras at one of our MOST favorites:  Betty's RV Park, in Abbeville, Louisiana!

Stay tuned for much adventure.
Posted by Dave'n'Kathy Vagabond Blog at 1:34 PM