As we made our way from Prince Rupert to Smithers, the first part of our drive was along the Skeena River. Once we passed Hazelton, we left the Skeena behind and started following the Bulkley River. The Bulkley was originally called Wet'sinkwha ("blue and green river") by the Wet'suwet'en people, the indigenous inhabitants of the Bulkley Valley. The name Bulkley came from Colonel Charles S. Bulkley, the U.S. Army engineer-in-charge of the survey team who, in 1866, explored the area in preparation for the failed Russian American Telegraph Line.

The first stop on our voyage of exploration took us to the Widzin Kwah Canyon located in the Town of Witzet (formerly Moricetown) which is about 12 miles from Smithers. We followed the Bulkley River down to where it cuts a narrow path through volcanic rock. For more than 5,500 years the Wet'suwet'en people fished along the canyon walls. 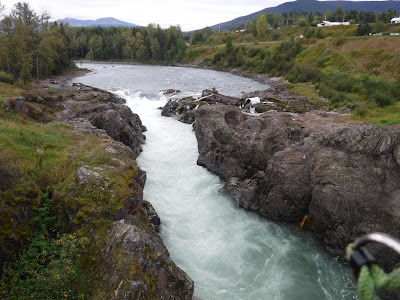 Today, the dip net fishing is part of a province wide initiative to bring back the salmon and steelhead populations to the Bulkley River and surrounding streams. We watched as a local fisherman carefully dipped a fish from the stream. 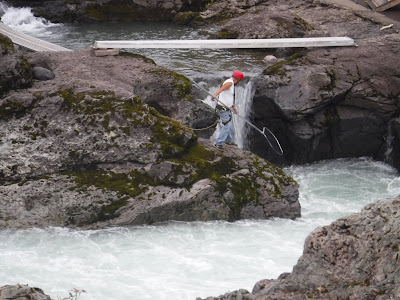 Another fisherman "walked the plank" to see if he could net one under the falls. 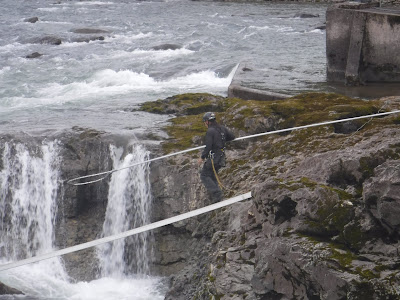 Once a fish is caught, it is brought to the weigh station where it is weighed, tagged and released. Unlike salmon, a steelhead trout does not perish after spawning. They can spawn three or four times and can live for up to eight years. 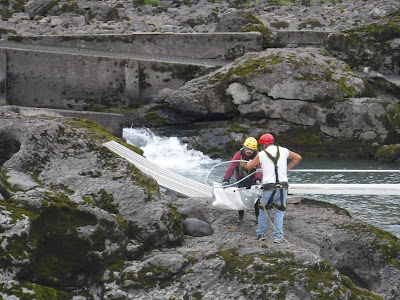 High above the canyon sits the Widzin Kwah Canyon House Museum. The small museum explains the history of the Wet'suwet'en people. There are several story boards, photographs and artifacts to browse through. 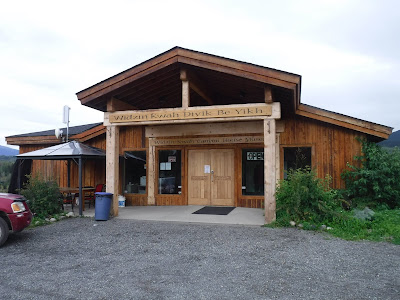 After exploring the museum, we stopped to take one last look at the canyon before heading off to our next adventure. 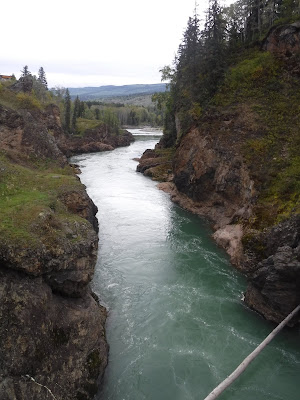 Our next stop was the Toboggan Creek Fish Hatchery. The hatchery is owned by the Salmon Creek Salmon Enhancement Society, a non-profit working with the government to improve salmon production. The hatchery is the furthest inland hatchery in BC.  Here they incubate Coho (Silver) and Chinook (King) salmon.  Below Kathy takes a look into one of the small fry holding tanks. 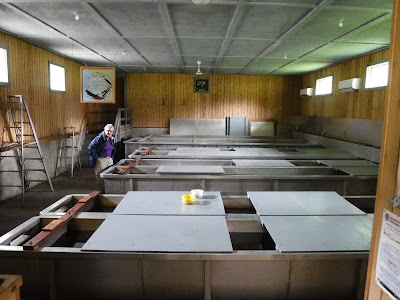 Once the little fishies are old enough, they are moved to the outdoor holding pens. Each pen holds a different type of salmon. The pens are covered with nylon string to discourage birds of prey from feeding on the fishies. During the winter, the ponds freeze over and fish lay low until spring when they are released into the wild. 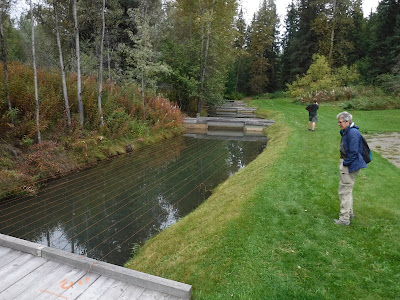 On the day we visited, one of the employees was getting ready to feed the fish. To see the frenzie of little fishies feeding, click the link to this video of feeding the salmon fry.

While Toboggan Creek is prime salmon spawning habitat, so few fish have made it upstream that the folks at the fish hatchery have to go downstream to catch their brood stock. However, we were told it was still possible that one or two could have made it up the creek to spawn. We hiked along the creek, but saw no evidence of spawning fish. 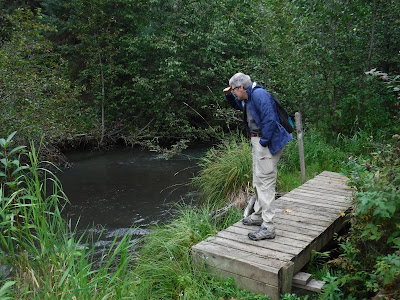 All this adventuring makes an adventurer hungry. On our way into Smithers for lunch, we stopped at Lake Kathlyn for a quick photo op. 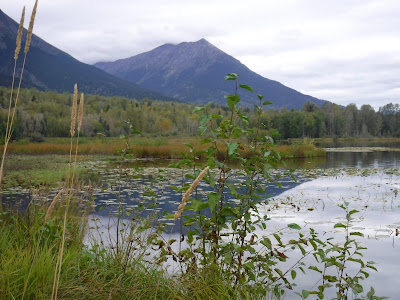 After lunch, we decided to check out the Riverside Municipal Campground located on the banks of the Bulkley River. There is a hiking path which leads from the campground and follows the river for a half mile. Along the trail, we noticed this area was once home to some very busy beavers. 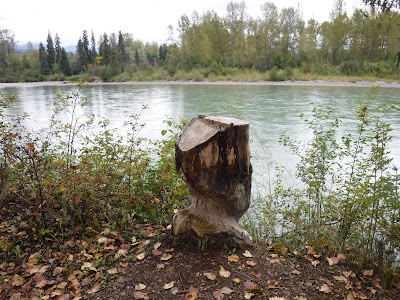 After leaving the banks of the Bulkley River, we headed across the Bulkley Valley to the Babine Mountains. 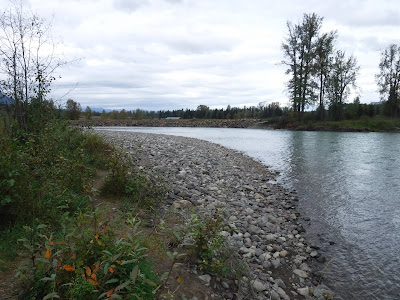 A small provincial park known as Driftwood Canyon is recognized as one of the world’s most significant fossil beds. 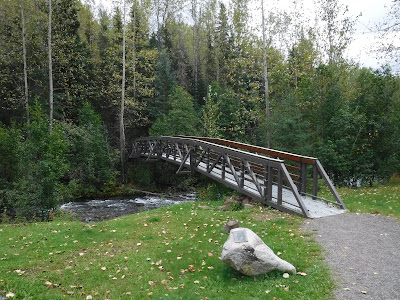 From the trailhead, we crossed a footbridge over Driftwood Creek. 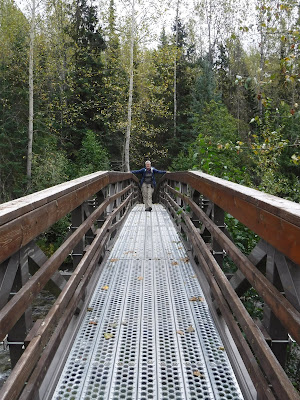 A short interpretive trail took us to a cliff-face exposure of Eocene shales that were deposited in an inter-montane lake. Interbedded within the shales are volcanic ash beds, the result of area volcanoes that were erupting throughout the life of the Eocene lake that produced the shales. Preserved within the shale formations are plant, animal and insect species that inhabited the area over 50 million years ago. We would have loved to climb up and take a closer look, but the area is being preserved for scientific research. 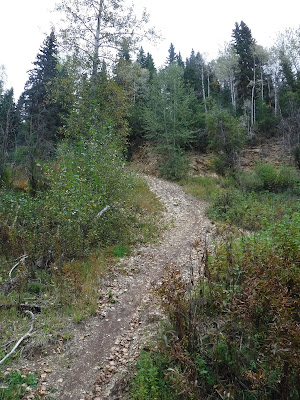 However, there were plenty of samples to examine at the viewing area, including this interesting specimen. 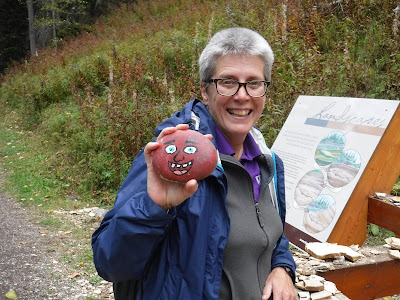 The slow deposition of fine mud in the lakebed formed sediments of shale and sandstone, eventually creating fossils of the organisms trapped inside. Each of these fine layers is a millimeter or less thick, and represents one year in the life of the lake or swamp. As the organisms became trapped within the layers, the absence of oxygen inhibited the decomposition of organic material. A chemical process then resulted in the fossils standing out as a dark brown or black imprint against the light-colored shale. Plant fossils are the most common, although vertebrates, including some of the oldest specimens of salmon, trout, and suckers, have been found in the shale beds.

Here's a closer look at the shale/sandstone with bits of embedded fossils: 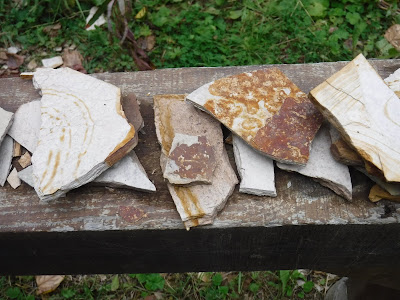 On our way back to the Jeep, we stopped to admire these unusual fungi on the trunks of some of the trees: 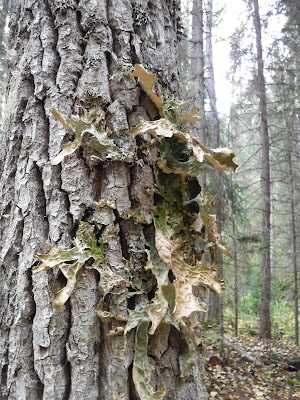 Tomorrow we head back to Prince George for a quick logistics stop before heading south to Williams Lake. We hope you are enjoying the fall color as much as we are.