Looking for the Treasure of History in Cerro Gordo

In researching our itinerary for Lone Pine, we ran across a suggestion that we drive up to the ghost town of Cerro Gordo, an abandoned mining camp that, in its heyday, was home to several thousand people.  It sits high in the Inyo Mountains above dry Owens Lake at an elevation of 8,500 feet.  "Cerro Gordo" means "fat hill" in Spanish, inferring that it was fat with silver.

We had about an hour's drive, on the road between Lone Pine and Death Valley.  Just before the highway starts rising over the pass away from Owens Lake, at the tiny hamlet of Keeler, we turned onto a gravel road that climbed steeply into the Inyo Mountains.

It didn't take us long to climb high above Owens Lake - the entire 8-mile drive bore us up over a vertical mile! 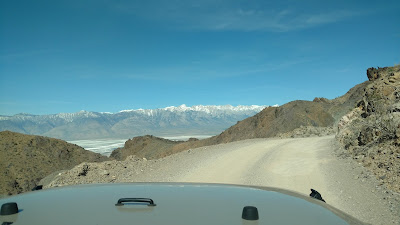 As we wound up through the canyons of the Inyo Mountains, we occasionally spied derelict mining equipment, including some supports for ore trams that, in later operations years, spanned down the mountains all the way to the town of Keeler on the lakebed, where a train would haul the ore on to Los Angeles.  As we passed one side canyon, Kathy spotted this section of tram line, still intact, with a loaded ore car still suspended from it! 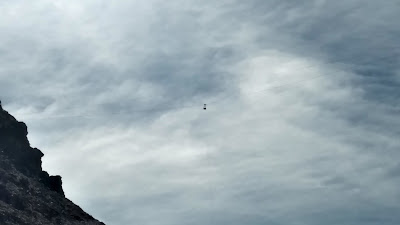 Our docent at the ghost town reported to us that someone flew a drone over the hanging ore car and verified that it was still full of zinc ore.  We wondered why the owners weren't required to bring the ore car down, considering the tramline could suddenly break, sending the tramcar full of ore crashing down on the road below - not to mention the nearby power lines.

Nearing the mines, we passed several open mine shafts.  Most of these appeared to be test holes, which did not penetrate far into the mountain. 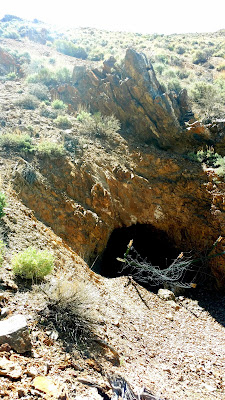 After a dramatic ride, we eventually arrived at Cerro Gordo Mines: 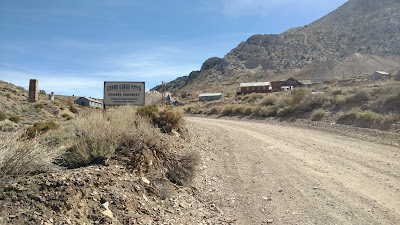 These mines extracted silver, lead and zinc over the years.  Discovery of the silver ore is credited to Pablo Flores, who began mining and smelting operations near the summit of Buena Vista Peak in 1865.  Cerro Gordo's ore was of such high quality that even the relatively primitive smelting methods of the early miners extracted a large amount of silver.  As a result, this mining camp high in the Inyo Mountains became California's greatest silver producer. The first real effort to develop any of the claims was made in 1866 by Jose Ochoa, who was extracting about 1112 tons of ore every 12 hours. The silver ore was transported in sacks by pack animals to processing plants and then to Los Angeles, which was made rich by the mining of the precious metal.  By 1870, 340 tons of bullion had passed through Los Angeles. Cerro Gordo's silver ingots were proudly displayed at most hotels and banks. 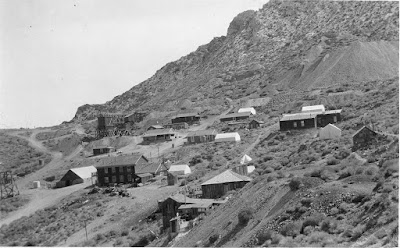 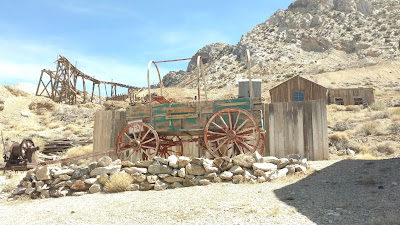 Current owners of the propery have found an endless number of archaeological and historical items, including this wooden ore car that, judging by its construction and the square, hand-made nails in it, was used in the early days of the mines: 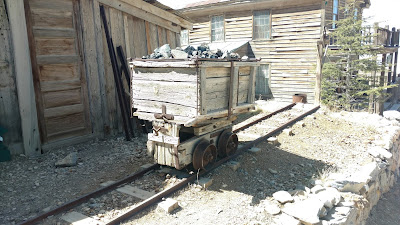 Some of the structures have been augmented and upgraded by recent owners.  This old garage has been remodeled into a stylized church, with the hope that, with the town's American Hotel remodeled as a bed and breakfast, the more recent owners might attract weddings and other events on the property. 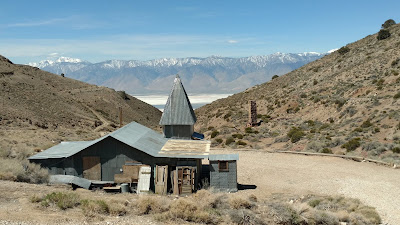 One of the most interesting buildings, in which we were allowed to explore the interior, was the Assay Office, used to determine the purity of the silver extracted from the mines.  In the photo below, you can see on the lowest shelf clay crucibles in which the ore was heated to extract impurities and determine purity of the precious metal: 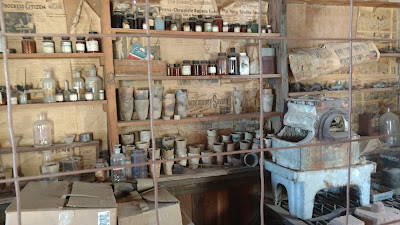 The Assay Office was located in the building to the left in the photo below.  Interestingly, it adjoined a house of ill-repute, the right-hand building below: 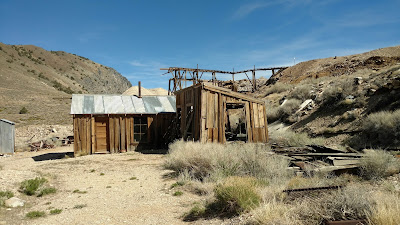 Maggie Moore operated the Waterfall saloon, dance hall and brothel located on the other end of Cerro Gordo, below the American Hotel. Lola Travis ran a similar establishment called the "Palace of Pleasure" here, adjoining the Assay Office.  Some humorous proprietor has resurrected a sign over the door memorializing Lola's business: 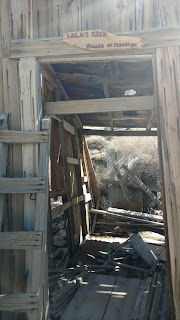 While many of the buildings shown in the 1915 photo above still appear to be standing, some are less "standing" than others.  This is a view THROUGH the American Hotel's ice house, looking out across the Owens Valley: 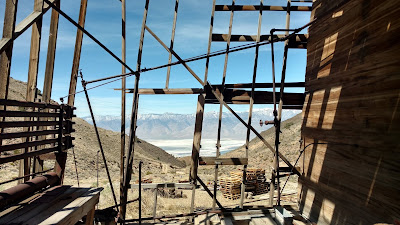 Several of the sturdier buildings house collections of items from the town and the mining camps.  All are very interesting, and most all of them appear to be for sale at an acceptable price.  In the photo below, Kathy marvels at the historic riches to be found in this building: 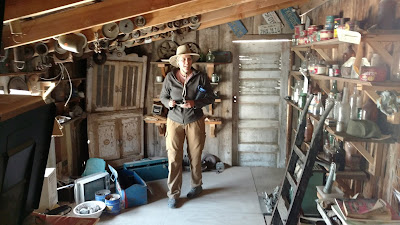 Said to be the oldest hotel in California east of the Sierras, the American Hotel was erected in 1871 by an Englishman named John Simpson and his wife. The downstairs featured a big bar, ornate dining room, kitchen and sitting rooms, while men working a shift in the mines could rent a bed in one of the dormitory rooms upstairs for 12 hours at a time.  In addition to the large dormitory-style room, the second story included two semi-private rooms, and one small private room that our docent believes may have been the residence of the owner.  Here's a view of the American Hotel present-day (photo credited to Leo de Leon): 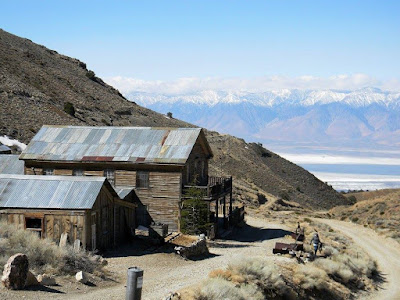 Cerro Gordo was a "wide-open town" with little law or order, and as a result, the mining town had a bloody record of shootings during the bonanza days.  The combination of whiskey and women made the dance halls, and the red-light houses of Lola Travis and Maggie Moore, the principal scenes of gunplay. Dr. Hugh McClelland, physician at Cerro Gordo, reflected upon one such incident the night he accompanied a young man wishing to visit one of the dance halls. A hot-tempered Mexican girl overheard McClelland explaining to his younger companion the reason for her odd nick-name, and came at the good doctor with a stiletto in her hand. An Irish girl caught her by the wrist and disarmed the screaming Mexican, but not before a Mexican man was shot dead by George Snow when he tried to plunge a knife into McClelland on behalf of his girlfriend. This ended in a general shooting until the lights were extinguished.

One back room of the American Hotel was apparently reserved for card-playing.  History recounts that one unlucky card player was shot dead in the card room by a shotgun blast, perhaps aimed from outside the room's exterior window.  The wall of the room shows the scars of shotgun pellets.  It also bears one bullet hole, from a bullet which may or may not have been fired in the same incident.  In any event, there is a dark stain on the floor in the back corner of the room, and our docent reports it may be the blood of the murdered card-player. 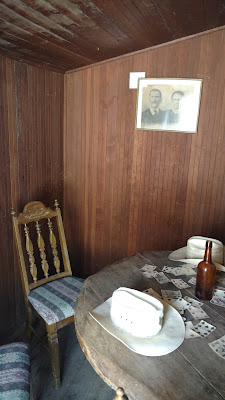 Another fatal incident is memorialized by a "Wanted" poster hanging on the wall of the hotel's card room: 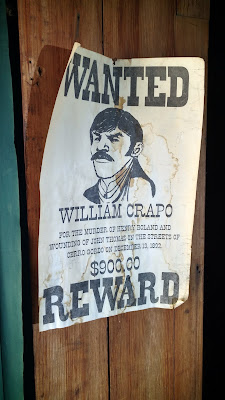 William "Billy" Crapo (pronounced "cray-poe") was a well educated French Canadian. He was well respected as a civil engineer, and had spent many years working in the mines. Crapo killed Henry Boland and wounded John Thomas December 29, 1892 as they walked past his cabin, reputedly hurling epithets in his direction.  This marked the last known murder in Cerro Gordo. Crapo disappeared and was never captured, even though the governor issued a $500 reward.

With these stories, our little brains felt stuffed with historic information.  We took a little stroll around another corner of town and then returned on our death-defying 1-mile vertical drop to the Owens Valley floor and back to Lone Pine.  Now to plan our next adventures here!